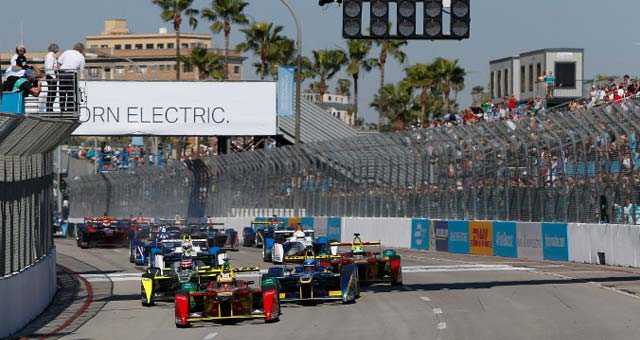 The double header in the USA has been rewarding for Formula E. The public success – more than 33,000 spectators in Miami and 23,000 at Long Beach – and the TV audience (more than 16 million viewers watched the Miami ePrix) was undeniable.

But the popularity of Formula E in the States was confirmed by the presence in the Long Beach paddock of VIPs Leonardo DiCaprio, Adrien Brody and Irina Shayk.

To complete the picture there was the extraordinary sporting history of the Piquet family. Nelson Jr won his first ePrix where his father won his first victory in Formula 1 in 1980 to the delight of his daughter Kelly, who watched her brother spray the champagne from the podium.

“I think it was a fantastic day, with the story of a son who retraces the footsteps of his father,” said the CEO of Formula E Alejandro Agag. “None of those who then followed the victory of Nelson Sr. would have imagined that, 35 years later, his son could have done the same thing but at the wheel of a racing car powered by an electric motor and yet is what happened!

“Our championship is something different from the other motor racing series: there is a new technology, a new form of entertainment and I think many people here in the US, but also in other parts of the world where raced so far, did not know what they could expect to see,” continued Agag. “They came by the thousands and I think had a great time: we were greeted with great warmth and passion and I look forward to coming back to the States next year.”

Now the American adventure is over, Formula E prepares for landing in Europe. The next stage of our world tour will take place in another historical location for motor racing, Monaco, on May 9. Then the electric cars will race in Berlin (May 23), Moscow (June 6) and in London for the grand finale on June 27/28.