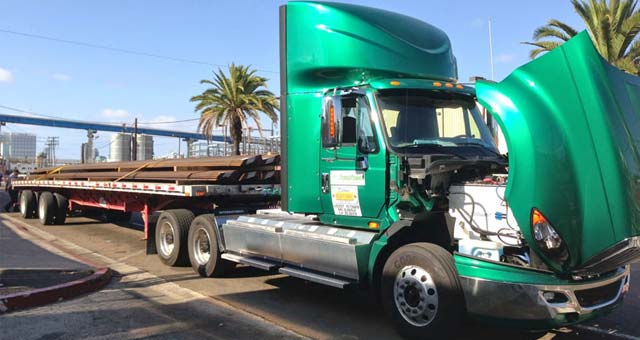 TransPower, a provider of clean vehicle and stationary energy storage technologies and products, announced that it has achieved several significant new milestones in its development of battery-electric, hybrid, and fuel cell propulsion technologies for heavy-duty vehicles including trucks, tractors, and buses.

Two of these milestones occurred the day before yesterday, when TransPower conducted a demonstration of four fully functional battery-electric Class 8 trucks, just hours after the California Energy Commission (CEC) announced its award of nearly $9 million to TransPower for new electric truck and tractor demonstration projects throughout the state of California.

“We are especially proud of the fact that we drove all four of these trucks from the heart of San Diego County 110 miles to the Los Angeles-Long Beach port region,” said Mike Simon, President & CEO of TransPower.  “These four trucks have made more than ten intercity trips of about 80 to 120 miles over the past year and we believe our battery-electric vehicles are the only proven, fully operational zero emission trucks in the world capable of hauling loads up to the Class 8 truck limit of 80,000 pounds.”

The four electric trucks were also partially funded by the CEC, with contributions from the U.S. Department of Energy (DOE), South Coast Air Quality Management District (AQMD), and Ports of Long Beach and Los Angeles.  Representatives from these agencies traveled to Rancho Dominguez for a “Ride & Drive” event featuring the TransPower trucks at the headquarters of Total Transportation Services, Inc. (TTSI), one of five private California firms presently utilizing Class 8 TransPower electric trucks or tractors in day-to-day service.

TransPower’s success in deploying electric trucks and tractors that operate reliably under real-world conditions was likely a factor in the CEC’s announcement that TransPower will receive funding for three new truck and tractor demonstration projects.  These new projects, expected to begin by this summer and to result in new vehicle deployments by next year, include:

– A collaboration with four operators of yard tractor fleets – IKEA, Harris Ranch, Grimmway Farms, and Devine Intermodal – to deploy five battery-electric yard tractors in California’s Central Valley and Sacramento.  Five new tractors will be distributed among these fleets, augmenting five similar tractors TransPower built in 2014, which are currently being operated by fleet operators such as IKEA, Dole Fresh Fruits, and SA Recycling.  TransPower’s proposal for the new tractor demonstration was the highest ranked proposal of 33 proposals received by the CEC for funding under its “Medium- and Heavy-Duty Advanced Vehicle Technology Demonstration” program.

– A project to demonstrate two additional electric tractors with Dole at the Port of San Diego, along with electric drayage trucks to be operated at the Port of San Diego by BAE Systems and Terminalift.  This project will also involve the upgrade of a large battery-operated “reach stacker” vehicle which TransPower built with funding from Terminalift in 2014.  This proposal was ranked third among the 33 proposals reviewed by the CEC.

– A project to install TransPower’s battery-electric truck system into a demonstration fleet of three refuse trucks.  Two of these trucks will be operated by the County of Sacramento and the third will be operated by a major waste hauling firm to be named later.  This proposal was ranked fourth among the 33 funding requests received by the CEC.

These new contracts continue a string of recent TransPower successes in acquiring funding to support its electric vehicle research, manufacturing, and demonstration projects.  Last week, the San Joaquin Valley Air Pollution Control District approved funding for a TransPower electric truck augmented with a hydrogen fuel cell to extend its operating range, augmenting a prior award for two fuel cell-electric trucks that was approved by the DOE and AQMD in December 2014.

Earlier this month, the Ports of Long Beach and Los Angeles, along with the AQMD, approved additional funding for TransPower’s largest current electric truck project, which will expand TransPower’s present battery-electric truck fleet from four trucks to seven by the end of this summer.  In late February, TransPower received a separate grant award from the CEC to fund expansion of its electric vehicle manufacturing facilities in California.  TransPower expects to soon receive another contract award, to expand its development and deployment of electric trucks with natural gas-fueled range extenders.  The total value of these new contract awards is more than $16.1 million, and they will increase TransPower’s current funded backlog to more than $21 million.

TransPower believes these recent successes may soon lead to even larger investments in zero-emission heavy-duty vehicles.