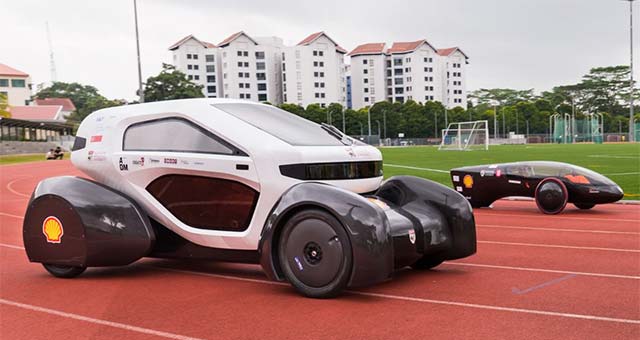 Mounted on a carbon fibre single shell chassis, the NTU Venture (NV) 8 will race in the Urban Concept category at this year’s Shell Eco-marathon Asia.

NTU students have also built the NTU Venture (NV) 9, a slick three-wheeled racer which can take sharp corners with little loss in speed due to its unique tilting ability inspired by motorcycle racing.

NV9, featuring hand-made silicon solar cells, will be NTU’s entry in the Prototype category at the Shell Eco-marathon Asia which will take place in Manila from 26 Feb to 1 March.

Designed from scratch by NTU undergraduates and built over a year, these two eco-cars will aim to attain the highest fuel efficiency.

Associate Professor Ng Heong Wah, who mentored the two teams, said the students had taken a leap of faith and decided to go with disruptive innovations instead of making improvements over the previous versions.

“Using the latest engineering techniques learnt from their studies in NTU, the students have developed innovations such as silicon solar cells that can be contoured to follow the car’s shape. This allows for maximum harvesting of the solar energy and a tilting mechanism in NV9 that can ‘lean’ in the direction of the turn to avoid losing speed,” Prof Ng said.

“We are extremely proud to have designed and assembled a 3D printed body shell for the electric car, which is Singapore’s first and probably Asia’s first 3D-printed concept car,” said Prof Ng. “The 3D printed car body was pushing existing technology to the limits and we are so pleased that it has paid off.”

Ilmi Bin Abdul Wahab, a year 4 computer engineering student who led the development of 3D-printed NV8, said, “We decided to go with a 3D-printed cabin made from lightweight plastic, as we wanted to maximise the internal space and driver’s comfort while still being able to keeping the weight to a minimum. Despite being an Urban Concept car, it is no slouch and can reach a top speed of 60 km/h (37 mph), while maintaining low energy consumption.”

Team Manager of the three-wheeler NV9 team Winston Tan, a final-year electrical and electronic engineering student said, “We took our inspiration for the tilting mechanism from motorcycle racing, where racers would lean left or right during sharp turns to maintain their handling and speed. For the car’s body, we aimed for it to be as streamlined as possible. The resulting design looks like a fusion between a F1 race car and a glider plane, with an all surround canopy for increased visual awareness.”

The two NTU teams consist of 16 students from the various engineering schools. Over a year, they had built the cars at the Innovation Lab housed at the School of Mechanical and Aerospace engineering.

With as many as 150 parts that had to be 3D-printed, the students collaborated with various NTU schools and research centres, as well as sponsors and institutions such as Stratasys, Creatz3D and The Singapore-MIT Alliance for Research and Technology (SMART).

The designer of the NV8 electric car, mechanical engineering student Kam Sen Hao, said, “Initially we wanted a supercar concept, but after taking into consideration the dimensional requirements for the competition, we ended up with a sensible cute micro-car with vertical opening doors, which will appeal to all ages.”

His co-designer, also from mechanical engineering, Ng Jun Wen, said it was a challenge to assemble the shell of the car which was produced in different parts separately by the various 3D printers at NTU and at other sponsor companies. The printing and assembly took the team three months’ worth of effort.

With annual events first in Asia, then the Americas and Europe, the Shell competition challenges students to design, build and drive a vehicle that can travel the furthest distance using the least amount of energy.