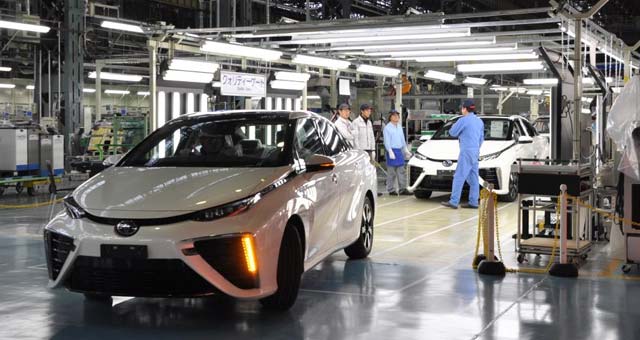 In November 2014, Toyota ushered in the future with the launch of the Toyota Mirai fuel cell sedan, followed by the Japan start of sales one month later.

Toyota held a production ceremony to mark the milestone of a new age of vehicles at its Motomachi Plant in Toyota City, Japan.

Production first started at the Motomachi Plant in 1959, and over its 56 year history, the manufacturing facility played a central role in realizing the dream of Toyota founder Kiichiro Toyoda: to foster an automotive industry in Japan and benefit society at large.

The plant started life as Japan’s first dedicated passenger car production facility. It has been home to some of Toyota’s most notable models, including the “Publica”, “Corona”, “Cresta”, “Soarer”, “Supra”, “RAV4”, and the Lexus “LFA” supercar.

The former “LFA Works” – where highly skilled craftspeople hand-built each of the 500 series limited Lexus supercars to some of the highest standards in the industry – has now become the home of the Mirai, just over two years since the last LFA exited the factory.

This small but dedicated facility is now charged with producing the hydrogen-powered sedan with the same care and attention to detail, with an estimated three units coming off the production line every day.

For the first time, go behind the scenes to see how the future is made. A description of the manufacturing process can be found at the bottom of this page.