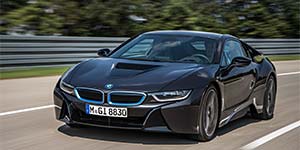 The BMW i8 plug-in hybrid sports car has been crowned UK Car of the Year for 2015.

Having fought off stiff competition to the title of Performance Car of the Year, the four-seat technological tour de force also won the overall vote. The win heralds back to back wins for BMW and its ‘I’ car programme as the BMW i3 was awarded UK Car of the Year in 2014. The BMW i8 was also recently named as Top Gear Car of the year.

Launched in 2014, the UK Car of the Year Awards are judged by 27 of Britain’s most-read motoring journalists. Each judge uses their expertise to pick out the top performer in 12 vehicle categories, before deciding the overall winner from their favourites in each class.

The UK has quickly become Europe’s biggest market for i8 sales with 450 registrations so far. There is currently a 9 month waiting list for car. The sister BMW i3 is also a sales success with the 1,860 car sold in the UK since its November 2013 launch.

BMW has also launched its Pure Impulse programme which includes unique experiences and preferential access to exclusive events purely for its i8 customers.

Craig Thomas, UK COTY judge, said of the BMW i8: “Just as the i3 helped redefine electric vehicles, so the i8 is helping to redefine what a sports car is, in a world attempting to reduce its dependence on fossil fuels. The pairing of a three-cylinder engine and electric motor gives mind-boggling headline economy and emissions figures, while it makes few compromises in the driving department.”

Graeme Grieve, BMW UK CEO, commented: “The BMW i8 is the culmination of many years of investment, hard work and commitment to creating the world’s most progressive sports car. With our first two BMW i vehicles – the i3 and i8 – being named consecutive UK Car of the Year winners, our technology strategy is being recognised as truly game changing for the car industry.”