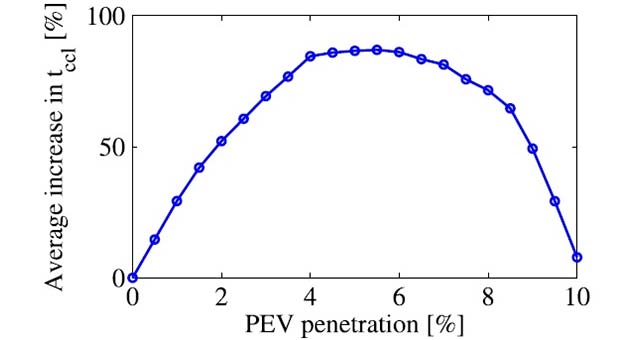 Today when an electric vehicle is plugged into the grid, it’s almost always in charge mode, meaning it consumes power.

But it’s also possible for an electric vehicle to operate in discharge mode, in which it acts as a giant battery and injects power into the grid when needed. Several recent studies have shown that plug-in electric vehicles (PEVs) operating as vehicle-to-grid (V2G) devices can offer advantages for the grid such as backup power for renewable energy sources, power regulation, and load balancing.

Now in a new study, researchers have found another potential advantage of using PEVs as sources of power for the grid: they can improve stability when the grid is subjected to large disturbances. Large disturbances are caused by a wide range of problems, such as abrupt load changes and line tripping. Among their negative effects, they can damage sensitive appliances and, if not cleared within a specific time, the system may be unable to resume stable operation.

The researchers, Andrej Gajduk, et al., at the Macedonian Academy of Sciences and Arts in Skopje, Macedonia, and other universities, have published a paper on their findings in a recent issue of the New Journal of Physics.

As the researchers explain, the last century saw the rise of two very large energy conversion systems: the electric utility system and the light vehicle fleet (cars, vans, and light trucks). Although the two systems were developed separately, the increase in electric vehicle use means that they will merge at some level in this century. In a sense, all vehicles can be thought of as mobile storage systems, and have a total power capacity that is about 24 times larger than the power capacity of the entire electricity generation system in the US. By 2020, PEVs are expected to account for 1-2% of all vehicles in the US, potentially offering unprecedented benefits to the grid, which itself has essentially no storage.

“The power grid and electrical vehicle fleet are exceptionally complementary; in particular, the electric vehicle fleet can enhance power gird transient stability, which could represent a huge problem as renewable energy sources will dominate the future electric power grids,” coauthor Ljupco Kocarev, Professor at SS Cyril and Methodius University in Skopje, Macedonia, and at UC San Diego in the US, told Phys.org.

In the new study, the researchers developed a control strategy in which PEVs regulate power to the grid by rapidly responding to large disturbances. In a simulation of the New England power system, 50,000 PEVs (representing 1% of all light vehicles in New England in 2020) each has the ability to exchange electricity with the grid at a maximum rate of 10 kW.

With the use of dedicated, high-speed, high-bandwidth Ethernet cables, the PEVs can receive information from generators within 10-20 milliseconds. A decrease in the turbine speeds at the generators signals a power shortage, and so the PEVs are instructed to feed additional power to the grid, essentially acting as small back-up generators. An increase in the turbine speeds indicates surplus power in the grid, causing the PEVs to consume the excess power. In order to be effective, the PEVs should respond as quickly as possible without overreacting.

The results of the simulations show that PEVs can improve stability in two ways. First, they can reduce the speed and voltage fluctuations resulting from large disturbances by up to 80%. And second, they can extend the critical clearing times (after which the system will be unable to resume stable operation) by 20-40%. In general, the PEVs can begin to stabilize the grid within seconds of a large disturbance.

While the PEVs provide benefits to the grid, they are not negatively affected themselves. This is because large disturbances are relatively rare, occurring about several hundred times per year. Further, the regulatory actions that follow large disturbances usually last only a few seconds, so that the effects of power regulation on the PEVs’ energy reserves are minimal.

Surprisingly, the researchers found that increasing the percentage of PEVs in the simulation improves the stability benefit only up to about 4% PEV penetration. After this point, the benefits level off and then degrade rapidly after reaching 7% PEV penetration. This negative effect is likely due to the PEVs overacting to the disturbance and injecting or withdrawing too much power from the grid. The results suggest that there is a limit to how much improvement can be achieved with this type of control. The researchers plan to investigate further improvements in the future.

“My future plans include developing and testing different control strategies, developing a rigorous framework to study both the steady-state and transient stability of the combined system power grid and electric vehicle fleet, and extending research methods to include the electricity market,” Kocarev said. “I believe that the V2G concept will enable a paradigm shift with synergistic benefits for the transportation and electricity sectors. Several V2G demonstrations are expected to be finalized in the near future, for example, by 2015 at the Los Angeles Air Force Base.”