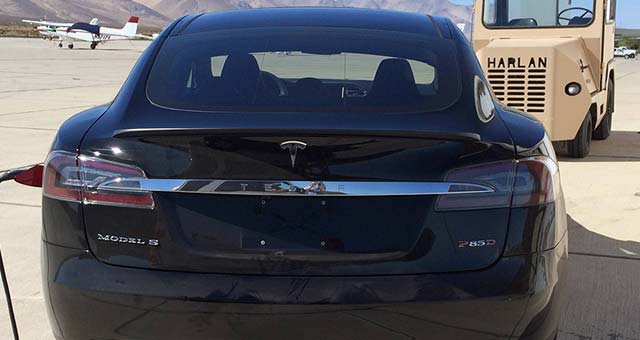 Tesla Motors will offer an all-wheel-drive system in its all-electric Model S sedan, CEO Elon Musk announced at an airport hangar in Hawthorne, outside Los Angeles.

In the Model S naming conventions, the letter “D” will stand for “dual motor.” The Model S is currently a rear-wheel-drive car, which has hurt sales in snowier climates. Tesla is adding a second motor to power the front wheels.

Tesla plans to offer it in all trim levels. It will be called the 60D, 85D or P85D, depending on whether the car has a 60- or 80-kilowatt-hour battery pack and whether the owner opted for the “performance pack.”

During the event, Musk also revealed driver-assistance systems that use cameras and radar to prevent drivers from drifting off the road or striking a car ahead of them when using cruise control. Though drivers are legally bound to pay attention at all times, the Model S will not force them to keep their hands on the wheel, Musk said. And if the driver pushes the turn signal lever, the car will change lanes on its own.

“Once we upload the software over the next two or three months,” Musk told reporters, “the Model S will have the most sophisticated driver assistance or autonomous functions of any (production) car on the road.”

Tesla’s production line started equipping the Model S with the necessary cameras and sensors about two weeks ago. Musk has positioned these sorts of features as a stepping stone to autonomous driving.

Musk told reporters that the company expects to have a “fully autonomous car” in five or six years,”with the regulators maybe taking two or three years beyond that to approve” the system.[wzslider height=”400″ lightbox=”true”]