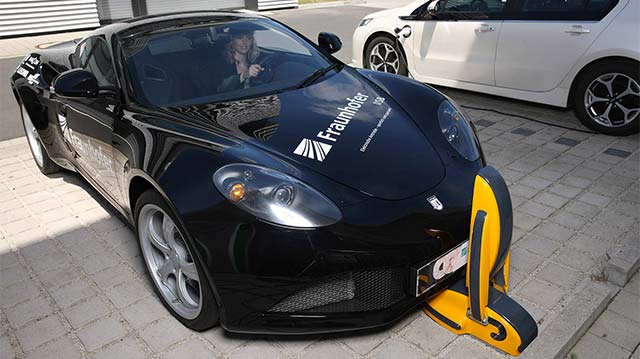 Cables are fast disappearing from our daily lives. The computer mouse has already lost its tail, our telephones and headphones have become wireless – even electric toothbrushes and cellphones don’t need cables anymore. Information is transmitted wirelessly, and power needs can be met via an electromagnetic induction supply system.

Researchers are in the process of developing wireless charging technology for electric vehicles, too. Researchers from the scientific and industrial communities have been working for several years to find ways to use induction to charge electric vehicles.

The current approach involves mounting induction coils on the underside of the vehicle and installing charging stations in the ground. But this brings with it a number of significant challenges. The coils need to be very powerful for the method to work because of the significant gap of up to 15 cm between car and ground. Powerful coils are large in size – and large coils are expensive, which pushes up costs.

There is also the problem of objects or animals impeding the charging process by blocking the transmission of power. Cats, for example, are attracted by the gentle warmth emitted from the charging station in the ground, and so see this as a comfortable resting place. Another particularly problematic issue is that metallic paper such as chewing-gum wrappers or cigarette packaging can blow under the car and into the induction zone, where it can get so hot that it bursts into flame.

Researchers at the Fraunhofer Institute in Germany began pursuing an alternative approach in a bid to resolve these problems. Working as part of the Energie Campus Nürnberg research platform it took them less than a year to develop a portable system for wireless charging electric vehicles from the front end.

Since this allows the car to be driven much closer to the induction source – essentially touching it – the coils themselves are much smaller in diameter than in the floor-based version, coming in at 10 instead of 80 cm across. The system is more efficient, more cost-effective and makes it less probable that obstacles will disrupt the flow of energy. The charging column is approximately waist-high and made of plastic. It bends backwards if pushed by the vehicle, and is even designed to flip down and out the way if the pressure applied is too strong. The coils are arranged in such a way that charging can take place even if the driver has not positioned the vehicle exactly in front of and centrally to the column. Clusters of coils that overlap vertically in the column and horizontally behind the license plate allow the current to flow irrespective of the vehicle’s size or height.

Scientists at the Fraunhofer Institute have been working on power electronics for electric vehicles for some twelve years now, and have been researching inductive charging for the last two. During this time they have accrued extensive expertise in the fields of power electronics, field simulation and current distribution within electromagnetic induction systems. In order to keep exchange resistance to a minimum, for instance, they designed coils that themselves consist of several thin coils each insulated one from the other.

The design of the wire coils is important because it is the coils that determine the direction and strength of the magnetic field. “We’ve been consistently upping the system’s performance over the past year, and are now in possession of a prototype that is able to transmit three kilowatts (kW) at an overall efficiency of 95 percent. Today’s electric car models can be recharged overnight,” says Dr. Bernd Eckardt, head of the Vehicle Power Electronics department at the Fraunhofer Institute for Integrated Systems and Device Technology IISB in Erlangen, Germany. The researchers are now looking to further increase the power of the coil, primarily to keep up with developing battery technology, and to cut the cost of the charge spot even further. “Nowadays, charge spots are offered as part of the sales package when customers buy an electric vehicle. This technology will only become a mass product if the price is right,” Eckardt explains.