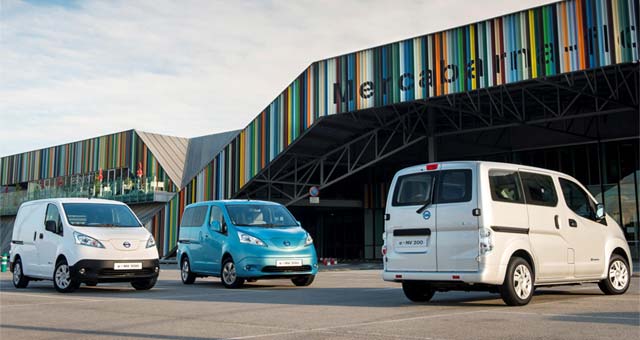 After featuring the Nissan LEAF, now it’s time for the Nissan’s second electric vehicle — the e-NV200 — to be reviewed in the Fully Charged Show.

The second all-electric car from Nissan was tested in Barcelona and general impressions seems to be positive.

Combining the best elements of two multi-award winning vehicles – Nissan LEAF and Nissan NV200, past World Car of the Year and International Van of the Year respectively – e-NV200 is ready to change the face of light commercial vehicles forever.

The Nissan e-NV200 is available as a van or as a five-seat people carrier in Combi or more luxurious Evalia guises. Although mainly targeted at businesses, e-NV200 will also appeal to private users with large families. The e-NV200’s homologated NEDC range of 170 km (105 miles) is greater than the average 100 km (62 miles) daily driving distance of over half the fleets who utilise this class of van and the payload and cargo area is the same as NV200’s. Maximum speed is expected to be 120 km/h (75 mph).

The battery can be recharged overnight using a domestic 16-amp single-phase 3.3 kW supply which reduces to four hours if a 6.6kW/32-amp supply is used. A dedicated CHAdeMO DC 50 kW quick charger can recharge the battery from 0-80 percent in just 30 minutes or less if the battery is already partially charged. More than 1000 public CHAdeMO quick chargers are now installed across Europe, in addition a number of companies have installed their own dedicated quick charging facilities at their home depots or offices.