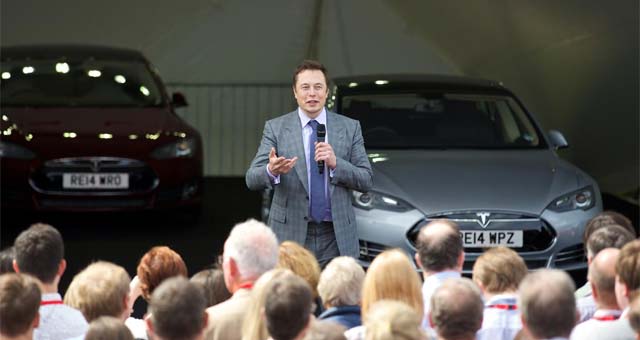 The occasion marks the beginning of a planned rapid expansion in the country in the coming two years.

Today, Tesla operates a store in WestfieldWhiteCity and a service centre in West London. By the end of 2014, however, customers will be able to visit Tesla stores and service centres across the UK. Tesla will also continue to hold test-drive events around the country.

Model S delivers 312 miles of NEDC range on a single charge. With a17-inch touchscreen, an outstanding safety record, and an acceleration of 0-60mph in 4.2 seconds, the fully electric Model S breaks the mould.

Right hand drive Model S cars in the UK come with software specific to the country and a configuration that fits the needs of owners who drive on the left hand side of the road. Everything from the wipers to the braces in the front trunk have been re-fitted for RHD.

The arrival of RHD Model S is accompanied by the Model S iPhone app, available in the UK iTunes store. The app puts Model S owners in direct communication with their cars anytime, anywhere. Owners can use the app to check on charging progress, start or stop charging, and heat up or cool down Model S before driving (even if it’s in a garage).

In the UK, prices for the Model S start at £50,280 on the road, including the £5,000 government plug-in grant. UK Model S customers can also benefit from other government incentives, including zero road tax, zero showroom tax, and exemption from London Congestion Charge. The car is also eligible for the 100 percent First Year Allowance for company purchase and 0 percent Benefit in Kind, both of which last until April 2015.

Tesla also energised the first Supercharger location in the UK at the delivery event. The Crystal site at London’s Royal Victoria Docks represents the beginning of a route to Paris and then the rest of Europe, which will enable Model S drivers to travel long distances in the UK and on the continent for free.

“Superchargers enable long distance travel but also, in a city where off street parking is rare and expensive, Model S customers will be able to access a network of Superchargers across London to charge, quickly and for free, at their convenience,” said Elon Musk. “We are looking at locations across the capital to place our first set of inner city Superchargers. Our plan for routes to other cities in the UK is still on target for the end of the year, but we are also announcing this new initiative in order to best serve our London-based customers. We expect customers to be able to travel the length of the UK for free using our Superchargers within the next 18 months”

Musk said that by the end of the year Model S drivers will be able to travel almost anywhere in Europe using Superchargers. The company is energising Superchargers at a rate of close to one per weekday. 116 Supercharger locations are energised worldwide including 19 locations in Europe. Tesla Superchargers have so far offset more than 2.5 million litres of petrol.

The Tesla Supercharger is one of the most powerful charging technologies available in the world today, providing up to 120 kilowatts of direct current to the Model S battery. Superchargers replenish half a charge in as little as 20 minutes and are strategically placed along well-travelled highways to allow Model S owners to drive from station to station with the fewest possible stops. Superchargers are located near amenities like restaurants, cafes, and shopping centres so drivers can stop for a quick meal and have their Model S charged at the same time.[wzslider height=”400″ lightbox=”true”]