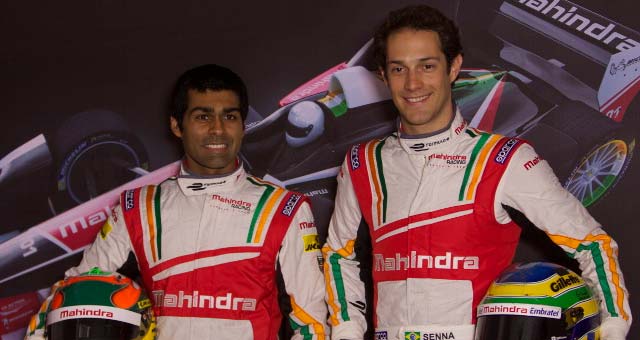 Mahindra Racing has announced that Karun Chandhok and Bruno Senna will join the team for the inaugural season of the FIA Formula E Championship.

The duo will represent Mahindra when they line-up on the grid at the start of the world’s first fully-electric racing series in Beijing on September 13 2014.

Neither Chandhok nor Senna are strangers to the international racing scene, having both competed in Formula One. Representing the only Indian team in Formula E, Chennai-born Chandhok and Brazilian Senna bring with them a strong working relationship, having already raced as team-mates previously in their careers.

To date, six of the 20 Formula E drivers (two per team) have been confirmed with Lucas di Grassi and Daniel Abt signing for Audi Sport ABT, in addition to Jaime Alguersuari and Sam Bird, who join Virgin Racing.

Formula E is the FIA’s new fully-electric single-seater championship designed to appeal to a new generation of motorsport fans, whilst accelerating the interest in electric vehicles and promoting sustainability. Racing entirely on temporary city-centre race tracks, it uses cars capable of speeds in excess of 150mph (225kph).

The first of 10 races takes place in Beijing around the iconic Olympic ‘Bird’s Nest’ Stadium with the season finale taking place in London on June 27.