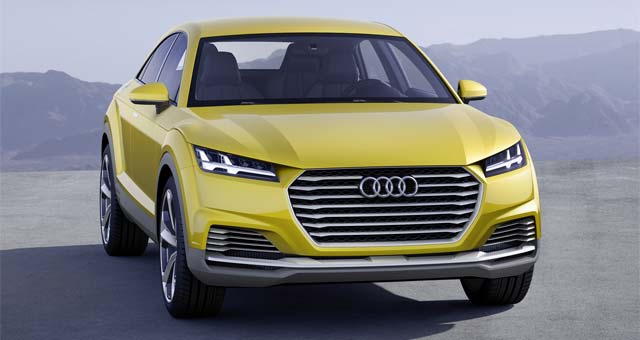 The Audi TT offroad concept breaks the mold, combining the sportiness of a coupe with the lifestyle and utility of a compact SUV. The four-door model, which Audi is presenting at the Beijing Auto Show, adds an entirely new expression to the Audi design language.

The Audi TT offroad concept features a plug-in hybrid drive with two electric motors and a system output of 300 kW (408 hp) provides for dynamic performance, yet consumes on average just 1.9 liters of fuel per 100 kilometers (123.8 US mpg).

The Audi TT offroad concept can drive over 50 kilometers (31.1 miles) solely on electric power and thus with zero local emissions, and has a total range of up to 880 kilometers (546.8 miles).

The combustion engine is a 2.0 TFSI producing 215 kW (292 hp) and 380 Nm (280.3 lb‑ft) of torque. The two-liter, four‑cylinder unit with the large turbocharger is packed with Audi’s potent efficiency technology. At part load, indirect injection supplements gasoline direct injection for lower fuel consumption. The exhaust manifold is integrated into the cylinder head – the foundation for the high-performance thermal management system.

A separating clutch links the transverse 2.0 TFSI to an electric motor producing 40 kW and 220 Nm (162.3 lb‑ft) of torque. The slim, disc-shaped electric motor is integrated into the six-speed e‑S tronic. The dual-clutch transmissions sends the torque to the front wheels. Mounted on the rear axle of the Audi TT offroad concept is a second electric motor independent of this drive unit. This produces a maximum of 85 kW and 270 Nm (199.1 lb‑ft).

In front of the rear axle is a liquid-cooled, lithium-ion battery comprising eight modules. It contributes to the balanced 54:46 weight distribution between the front and rear axles and to the low center of gravity. The battery stores up to 12 kWh of energy, enough for an electric range of 50 kilometers (31.1 miles). An Audi wall box, which manages the energy feed conveniently and intelligently and can deal with a variety of voltages and outlets, is used for stationary charging.

The show car is also designed for use with Audi Wireless Charging technology for contactless inductive charging. The infrastructure side – a plate with a coil and an inverter (AC/AC converter) – is placed on the parking spot of the Audi TT offroad concept and connected to the power grid. The charging process begins automatically when the car drives onto the plate. The alternating magnetic field of the infrastructure side induces a 3.3 kW alternating current across the air gap in the secondary coil, which is integrated into the vehicle. The current is inverted and fed into the electrical system.

Charging stops automatically when the battery is fully charged. It takes about as long as charging via a cable, and the driver can interrupt the process at any time. The Audi Wireless Charging technology is more than 90 percent efficient, and is not affected by weather factors such as rain, snow or ice. The alternating field, which is only generated when a car is on the plate, is not harmful for people or animals.

The intelligent plug‑in hybrid concept of the Audi TT offroad concept really shines when driving, making the show car every bit as efficient as it is sporty. The Audi drive select management system offers three driving modes. EV mode gives priority to electric driving. In this case, the front drive unit is inactive, and the electric motor at the rear axle with its powerful torque can rapidly accelerate the four‑door car to a maximum of 130 km/h (80.8 mph). In Hybrid mode, all three drives work together in various ways as necessary. In many situations the front electric motor assumes the role of a generator. Powered by the engine, it recharges the battery and thus extends the electric range. Full system output is available in Sport mode. During “boosting,” i.e. strong acceleration, the rear electric motor works together with the 2.0 TFSI. The same thing happens when the hybrid management system decides that all‑wheel drive is appropriate. In such situations, e.g. on a slippery road or in light off-road conditions, this essentially makes the Audi TT offroad concept an e‑tron quattro.

When the driver takes his or her foot off the accelerator, free-wheeling or “coasting” is activated. Recuperation occurs here at low speeds and when braking. The driver can use the “Hold” and “Charge” functions in the MMI system to specifically influence the battery’s charge state, e.g. to increase storage of electric energy so that it can be used over the final kilometers to the destination.

Chassis
The Audi TT offroad concept shows its strong character on any road surface and in any terrain. On asphalt the show car is sporty and composed, and it can easily handle light terrain thanks to its high ground clearance, short overhangs and e‑tron quattro all-wheel drive. 255/40-series tires are mounted on 21‑inch wheels, whose delicate five-arm design draws on the look of the Audi e‑tron models. Dark trim provides contrast.

Driver assistance systems
The Audi TT offroad concept show car features two Audi driver assistance systems that are almost ready for production: the intersection assistant and online traffic light information technology. The intersection assistant aims to help to avoid side-impact collisions, or reduce their severity, where lanes merge and at intersections. Radar sensors and a wide-angle video camera scan zones to the front and sides of the car. If the system detects a vehicle approaching from the side and assesses it to be critical, graduated warnings are displayed in the Audi virtual cockpit.

Online traffic light information is a technology that connects the Audi TT offroad concept via the cell phone network to the central traffic computer, which controls the traffic light systems in the city. Based on the information from this system, the Audi virtual cockpit shows the driver what speed to drive in order to reach the next traffic light while it is green. The cockpit displays the time remaining when waiting for the light to turn green.

Body
Like many of the brand’s new production models, the Audi TT offroad concept is also based on the versatile modular transverse matrix (MQB). The body of the show car is based on the ASF (Audi Space Frame) principle and features a hybrid concept with both steel and aluminum components. Together with the battery package of the plug-in hybrid drive system, it gives the compact crossover a low center of gravity, which is a prerequisite for its sporty performance.

Exterior design
4.39 meters (16.2 ft) long, 1.85 meters (6.1 ft) wide and a wheelbase of 2.63 meters (8.6 ft) – in these dimensions the Audi TT offroad concept resembles today’s compact SUV, the Audi Q3. At 1.53 meters (5.0 ft) tall, however, it is 8 centimeters (3.2 in) shorter, making its sporty character obvious at first glance. The Sonora Yellow outer skin appears to have been modeled from a solid block; the interplay of the clearly drawn lines and the muscularly taut surfaces produces a highly dramatic design. It uses the design language of the Audi TT, but places its elements in a new context.

Horizontal lines dominate at the front of the new Audi TT offroad concept. The broad Singleframe grille bearing the four rings is sculpturally embedded in the body. Two subtle indents in the lower region make the grille appear lighter. Narrow louvers in the grille insert form a structure typical of the Audi e‑tron models.

The large air inlets below the Matrix LED headlights are framed in sharp edges and structured with louvers. A third, flat inlet below the grille joins them together. Inside is a blade that increases downforce on the front axle and makes the front of the Audi TT offroad concept appear even wider.

Interior
The interior of the Audi TT offroad concept offers space for four. The rear seat can accommodate two adults comfortably. The slim sport seats with integrated head restraints ensure lateral hold. The side bolsters of the front seats are very strongly contoured.

The design ideas of the new TT were also the inspiration for the sporty interior of the show car. The top of the instrument panel is designed as a wing. This is supported by a visible aluminum structure that as a horizontal design element incorporates the air vents and underscores the width of the interior. The round air vents are reminiscent of jet engines and incorporate the air conditioning controls. The slender instrument panel is focused on the driver.

A large number of functions can be controlled via the multifunction steering wheel or the MMI terminal on the center tunnel console. The menu structure is oriented on a smart phone, with all key functions easy to reach. The driver can use finger gestures on the touchpad of the MMI terminal to zoom or scroll in lists and maps. All other functions can be easily controlled via the multifunction steering wheel without having to look away from the road.

Serving as the display instrument is the Audi virtual cockpit. The 12.3‑inch TFT display produces high-quality 3D graphics. The driver can customize the display with the push of a button. The classic view is dominated by the speedometer and the power meter for the plug‑in hybrid drive. In Infotainment mode, elements such as the navigation map or online traffic information displays take center stage. The Audi virtual cockpit also displays detailed information on charging with the Audi Wireless Charging technology.

The center tunnel console, which extends all the way to the back seat, contains numerous cup holders and storage bins. One of these is reserved for the Audi phone box, which connects the driver’s cell phone to the on‑board electronics and also charges it inductively, when necessary.

The show car is equipped with three Audi Smart Displays. The fast tablets serve as a mobile infotainment system for use inside and outside of the car. From DVD or TV streaming to controlling the radio or navigation planning, the Audi Smart Display is extremely versatile. One click on the “more” button in the start menu establishes an Internet connection via Audi connect at LTE speed. The user now has access to all of the functions of the Android operating system, from browsing with Google Chrome to visiting the Google Play store.

Two loudspeakers for the Bang & Olufsen Advanced Sound System are installed in the head restraints of the individual seats. They provide for optimal surround sound throughout the cabin to create a special sound experience. The head restraint speakers are also used for voice announcements and telephony. This guarantees extraordinarily good sound quality and outstanding speech transmission even during fast, sporty driving.

A custom-designed box in the trunk contains a 1:8‑scale radio‑controlled (RC) car. There is also space for the battery and tools. The power-folding individual rear seats allow for a nearly flat cargo floor.

In keeping with the sporty character of the show car, the interior features fine materials and a combination of light and dark gray tones. Granite Gray Fine Nappa leather is used on the rim of the steering wheel and in the outer zones of the door liners. The headliner, the pillar covers, the door panels and the center tunnel are covered with matching Alcantara. The door armrests, the center tunnel console and the seats with diamond-patterned stitching are covered in very soft, luxurious Stone Gray leather from the Italian company Poltrona Frau.[wzslider height=”400″ lightbox=”true”]