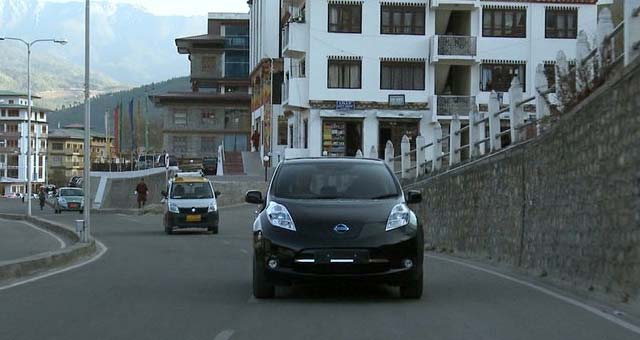 The Himalayan kingdom of Bhutan has partnered with Nissan Motor Co. to become the ultimate showcase for electric cars, taking advantage of its abundance of hydropower.

Nissan has entered into an agreement with the Royal Government of Bhutan with the shared goal of achieving the nation’s eco-friendly vision for the future.

Bhutan’s government is targeting electric cars as a key strategy to achieve its goal of becoming a zero emissions nation. It envisages Thimphu as a “clean-electric” city in which transportation for its more than 100,000 citizens is powered by clean energy. Bhutan generates sufficient hydro-electricity that clean energy is the country’s major export, but it must import fossil fuels to run its current vehicle fleet. Bhutan is seeking to reduce its oil imports significantly.

As a first step in the cooperation Nissan will deliver Nissan LEAFs for use in the government fleet, and as taxis, as well as demonstration units for the national rollout of electric cars. Quick chargers will also be supplied to implement the government’s plan for infrastructure covering the entire Himalayan nation. Feasibility studies for further technical cooperation are included in the details of the agreements.

The Royal Government of Bhutan will study implementation of an exemption from the green tax, sales tax and custom duty for electric cars as well as a carbon credit scheme where the sale of electric cars will earn credits that can be traded for tax exemptions for imported internal combustion engine-powered vehicles.

“The Royal Government of Bhutan is pleased to launch this partnership with Nissan as we work to achieve our vision of a leading global EV nation,” said Tshering Tobgay, Bhutan’s prime minister. “Nissan’s global experience will be invaluable as we make progress towards an electrified national transport infrastructure.”

“As the world’s leader in zero emissions and the maker of the best-selling electric vehicle, the Nissan LEAF, we believe in and will support Bhutan’s breakthrough vision of its future transportation,” said Ghosn. “We will also use the opportunity of supplying the Nissan LEAF and our quick chargers to Bhutan to demonstrate how our electric vehicle business can be scaled in emerging markets that are rich in clean-energy.”

Nissan LEAF is the world’s best-selling electric car, selling a cumulative 100,000 so far since going on sale in late 2010, comprising 45 percent of the global electric vehicle market.

In 2014, Nissan will market an all-electric light commercial vehicle, the e-NV200, in Europe and Japan. Nissan is committed to ongoing innovation in electric vehicles and is determined to maintain its leadership position in the market and bring the benefits of zero-emissions mobility to progressively more people around the world.