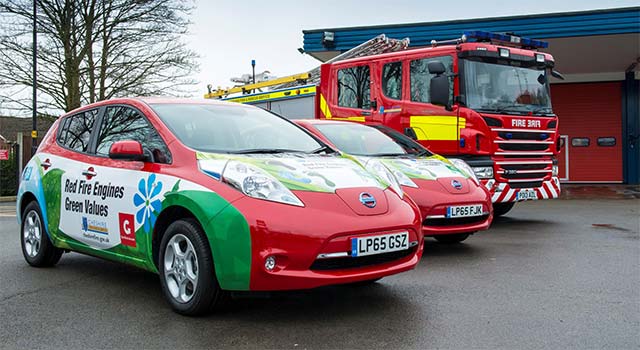 Nissan’s electric vehicle offering remains the popular choice for fleet operators across Europe, with sales of the Nissan LEAF and e-NV200 in the fleet market climbing for a fourth consecutive year in fiscal year 2015.

Up 45 percent on the previous fiscal year, Nissan sold more than 7,500 LEAFs and e-NV200s to fleet operators and municipalities in Europe, commanding a 28 percent share of the pure electric fleet market. With over 20,000 Nissan EVs sold to fleet customers across Europe since launch, it’s clear that business owners are switching on to the benefits of zero emission mobility.

With fewer moving parts, Nissan EVs provide estimated maintenance costs up to 40 percent lower than petrol or diesel alternatives. Furthermore, many European fleet owners can also benefit from varied incentives offered by governments across the continent, all whilst saving on energy consumption; providing a cost-effective, simple solution to reduce their carbon footprint.

Postal services are among the many service providers that have been particularly quick to take advantage of the clear benefits associated with switching to electric. Österreichische Post AG, the Austrian state postal authority, already utilises 160 e-NV200s and has recently confirmed an order for 100 additional units.

Many public bodies and government organisations across Europe have also decided to lead by example and convert their fleets to zero emission vehicles. In the UK, Nissan has sold over 350 EVs to public entities and the City of Bari in Italy has just launched a car sharing service in cooperation with ACI Global using 30 Nissan LEAFs.

In the UK, Nissan’s total EV fleet sales for FY15 were up 43% compared with FY14, with 2,573 combined LEAF and e-NV200 sales versus 1,806 for the previous financial year. Electric vehicles now make up around 3% of all fleet sales with an increasing number of major contracts including West Midlands Police renewing its fleet of 30 Nissan LEAFs and upgrading to the new 30kWh model.

Nissan celebrates this all-important milestone some five years after the launch of the Nissan LEAF, the world’s first mass-market, zero emission vehicle and just one year since the launch of its 100 percent electric e-NV200 light commercial vehicle. The Nissan LEAF remains the best-selling electric vehicle of all time, with almost 220,000 units sold worldwide. In FY15, 16,916 Nissan LEAFs were sold in Europe, securing a new annual record.