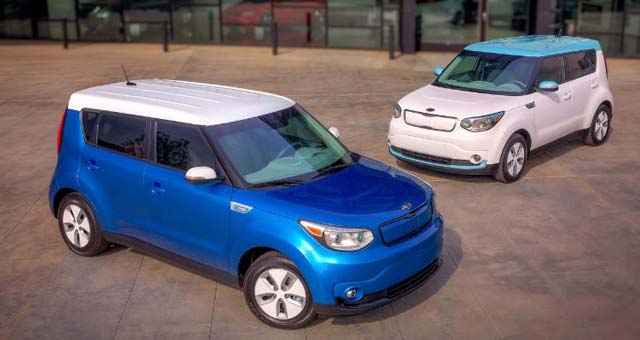 The all-new Kia Soul EV will make its European debut at the 2014 Geneva Motor Show, alongside a special technology exhibit for the brand’s next-generation hybrid powertrain.

These will be joined on the stand by the enhanced Kia Sportage and upgraded Optima Hybrid, as well as the GT4 Stinger concept car which made its global debut at the Detroit Auto Show earlier this year.

Embodying the design of the recently-launched second-generation Kia Soul, the all-new Kia Soul EV will become the brand’s first globally-sold electric vehicle when production starts in the second half of 2014.

The Soul EV is a front-wheel drive electric vehicle with a high-capacity 27 kWh lithium-ion polymer battery pack and class-leading 200 Wh/kg battery energy density. Power comes from an 81.4 kW electric motor producing a generous 285 Nm of torque. The vehicle will appeal to city commuters thanks to a driving range of around 124 miles (200km) on a single charge.

The Soul EV will benefit from accomplished ride and handling and a high level of refinement thanks to the car’s low centre of gravity, revised platform and chassis and new materials designed to reduce noise, vibration and harshness.

To maximise the efficiency and potential range of the Soul EV, the vehicle features a number of energy-saving technologies that reduce load on the battery and increase maximum driving range. These include new advanced heating, ventilation and air-conditioning technologies, including a world-first ‘driver-only’ individual ventilation system, four-mode regenerative braking and a battery heating system.

The Soul EV will also be one of the most practical EVs on the market when it goes on sale in Europe later in 2014, as a result of minimal intrusion by the batteries into the cabin and luggage space. As with every other Kia model, the Soul EV will guarantee owners with the peace of mind provided by Kia’s unique seven year / 100,000 mile warranty.

As well as showing new production-ready low emissions vehicles at Geneva, Kia will display a standalone exhibit of a new hybrid technology, developed by the brand’s European R&D centre for use in future Kia models.

The hybrid system consists of a 48V lead carbon battery connected to a small electric motor, increasing the engine’s power output. The battery also supplies energy to an electric super-charger, which increases torque and power at low engine speeds.

Under the right conditions, the hybrid powertrain can drive a car in electric-only mode at low speeds and while cruising, while the battery is recharged under deceleration. And when the car is stationary, the technology also acts as a zero-emissions stop-start system, performing this function with almost no noise or vibration as it is a belt-starting system. The technology also enables Kia engineers to reduce the size – and weight – of its vehicles’ existing 12V battery.