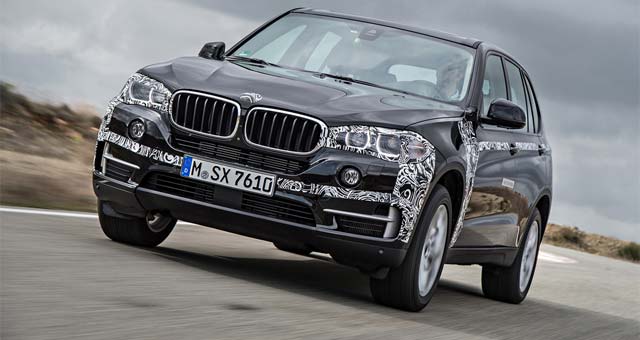 With the BMW Concept X5 eDrive model presented at the 2013 Frankfurt Motor Show, the BMW Group highlighted a further way in which Sports Activity Vehicles (SAV) can be made more efficient.

BMW X5 eDrive Plug-in Hybrid gets a four-cylinder 2.0-liter TwinPower gasoline turbo pushing out 245 hp, mated to a 70kW / 90hp electric motor. BMW suggest the combined system output of will be between 272 hp and 306 hp.
This is a combination that not only gives the BMW X5 eDrive the typical BMW sporty temperament but equally turns the focus on efficiency and eco-friendliness. Thanks to the boost function of the electric motor, the SAV can deliver powerful acceleration and a 0 – 100 km/h (62 mph) sprint time of less than seven seconds.

The development goal for this model is average fuel consumption of approximately 3.8 liters per 100 kilometers (74 mpg imp or 61.9 mpg US) in the EU test cycle, and CO2 emissions of 90 grams per kilometer – new benchmarks in this vehicle category. The vehicle is also capable of all-electric operation for up to 30 kilometers (over 18 miles), in which mode its produces no emissions at all at the point of use.

Thanks to perfect synchronization of the BMW eDrive technology with the intelligent BMW xDrive all-wheel-drive system, the drive torque from the electric motor, the four-cylinder gasoline engine or both power sources operating in tandem can be split in a variable ratio between the front and rear wheels. The split is automatically controlled to provide superior traction, optimal stability and highest standards of agility and performance under all conditions. At the same time there are no compromises on the customary luxurious driving experience offered by the BMW X5, or on its high standards of drivability in both short- and long-distance use.

Whereas the BMW i8 is fitted with the BMW Group’s highly turbocharged three-cylinder engine, the future BMW X5 eDrive will use a state-of-the-art four-cylinder gasoline engine from the same family – the new Efficient Dynamics engine range with TwinPower Turbo technology. This demonstrates the BMW Group’s overall aim of providing a customized electric mobility solution in every model series.