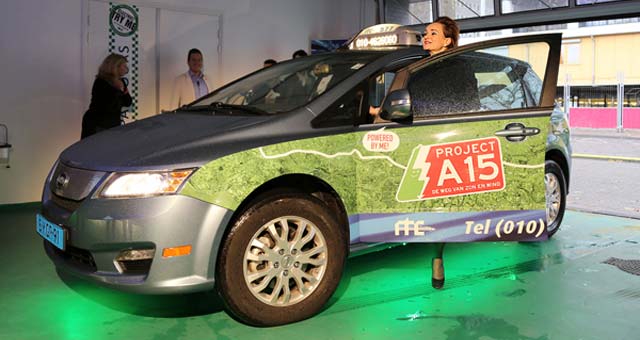 Rotterdam Taxi Centre (RTC), one of the biggest taxi operators in the Netherlands, is switching to electric taxis and has put into service two BYD e6 models, following successful extensive operation with an e6 model.

RTC plans to extend its fleet of emissions free pure electric taxis to 25 within the next 18 months, according the CEO of RTC Mr. Sjaak de Winter.

The City will install the 500th charging point in the City next week supplied with ‘green’ electricity from renewable sources.

The successful trials of the BYD e6 taxi has demonstrated that the car has sufficient range to cover a typical day’s operating cycle on a single charge and can be recharged quickly during breaks when required. The trials confirmed that the e6 gives its passengers a quiet and comfortable ride.

The BYD e6 is a spacious, five-passenger, crossover vehicle powered by the BYD Fe battery (lithium-iron phosphate). The battery has a more than 4,000rated cycle life with the highest safety level in the industry. It takes only two hours to fully charge the e6 using AC fast charging solution developed by BYD.

This BYD e6 can then travel for an unprecedented range up to 300km (190 miles), providing both the driver and passengers with an excellent driving experience and zero emissions/zero pollution.