Nissan LEAF Can Now Power The Office, As Well As The Home 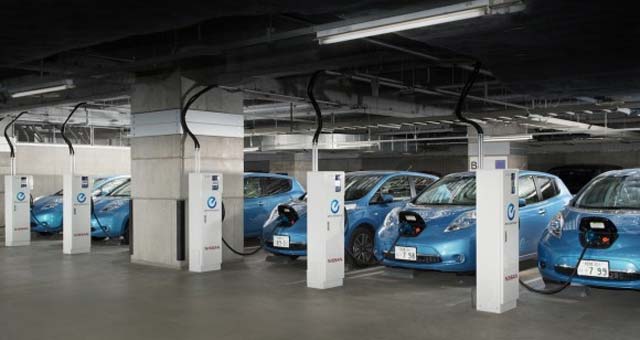 Nissan has carried out a successful early field test of a system that will allow companies to regulate their electricity bills using the batteries of Nissan LEAFs used by their staff to commute to work.

“Vehicle-To-Building” allows up to six Nissan LEAF EVs to be connected to a building’s power distribution board. Charging is phased during the day so at peak hours, when electricity is most expensive, the building draws power from the cars.

When electricity is cheaper it flows the other way. The system ensures the Nissan LEAFs are fully charged by the end of the working day for their owners to drive home.

“Vehicle-to-Building” has been in use at the Nissan Advanced Technology Center in Atsugi City, Japan, since July. The facility benefited from a reduction of 25.6KW during peak summer periods by controlling the charging time of the EVs, with no impact on the workers’ daily commute, or their vehicles. The results have led to approximately a 2.5-percent reduction of electrical power use during peak hours, a saving of nearly 500,000 Yen per year in electrical power cost (based on current Tokyo Electric Power Company’s rates).

Nissan plans to further test and refine the “Vehicle-To-Building” system, which is a development of the “LEAF-to-Home” system. “LEAF to Home” power units provide an uninterrupted flow of electricity stored in the high-capacity batteries onboard Nissan LEAF electric vehicles to residential homes. The system will help encourage Nissan LEAF owners to charge their cars with electricity generated during the night, when demand is low, or sourced from solar panels. This assists in balancing energy needs by supplying electricity to homes/offices during daytime, when demand is highest. It can also be used as backup power source in case of a power outage and/or shortages.

Cumulative sales of the Nissan LEAF have now passed 87,000 units making it the best-selling electric vehicle in history.