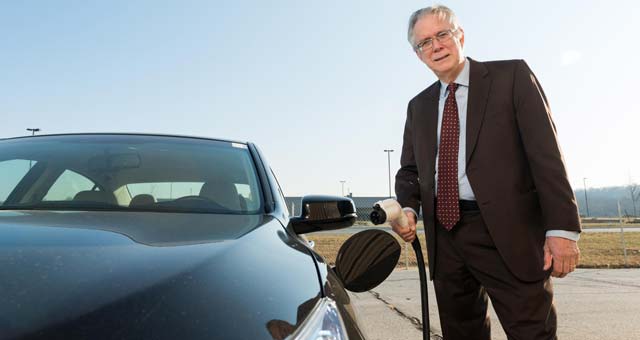 The Honda technology builds off of the research conducted by the University of Delaware and now supported by NRG Energy, Inc.

NRG and the University of Delaware, through their eV2g joint venture, came online early in 2013 with the world’s first revenue-generating vehicle-to-grid project, demonstrating the controls, regulatory requirements, and market participation rules for selling energy storage from vehicles into the PJM Interconnection Regulation Market. Honda is supplying an Accord Plug-In Hybrid with added V2G capabilities to the University’s Science, Technology and Advanced Research (STAR) Campus to jointly investigate the potential of this technology to benefit the electrical grid, vehicle owners and society.

Using smart grid technology, the V2G system is able to monitor the status of the grid to determine whether the grid requires additional power sources that can respond rapidly, or the grid requires power demands that can absorb transitional power supply. Such a system has the potential to reduce or eliminate the fluctuation of the grid, which can occur more frequently when renewable energy sources are introduced to the grid. Electric vehicle owners potentially benefit from supporting a more stable power grid, which can lead to reduced utility costs for the vehicle owner.

The Honda Accord Plug-In Hybrid demonstration vehicle is equipped with a bi-directional on-board charger, which allows the vehicle propulsion battery to both charge from and discharge to the electrical grid.  With an additional communication device, the vehicle receives signals from a grid operator via a charging station, and controls charge and discharge in accordance with the signals.  When electric power is requested by the grid, the vehicle will discharge power from its battery.  When the grid power supply exceeds demand, the vehicle proactively charges its battery.