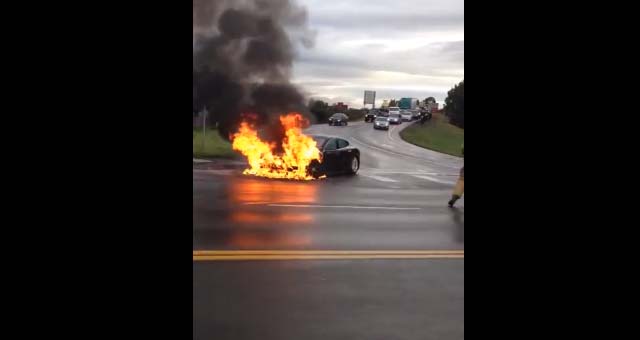 Shares of Tesla Motors fell $12.05 to $180.95 in New York trading on Wednesday. That was still enough to lower Tesla’s market value by $600 million to just under $22 billion, making it one of the costliest car fires ever — although Tesla shares are still up 400 percent this year.

Tesla’s market value currently is around $23 billion, nearly half that of General Motors Co, which is worth $49 billion.

The driver of the Model S reported running over a metal object; soon after, the Model S computer system warned of something wrong with the car.

You can watch a short video of the Model S fire on fire below.

“Yesterday, a Model S collided with a large metallic object in the middle of the road, causing significant damage to the vehicle. The car’s alert system signaled a problem and instructed the driver to pull over safely, which he did. No one was injured, and the sole occupant had sufficient time to exit the vehicle safely and call the authorities. Subsequently, a fire caused by the substantial damage sustained during the collision was contained to the front of the vehicle thanks to the design and construction of the vehicle and battery pack. All indications are that the fire never entered the interior cabin of the car. It was extinguished on-site by the fire department,” Tesla said in a statement.

The Tesla Model S itself has received rave reviews, including a top crash-test score from the National Highway Traffic Safety Administration and a tie for the highest auto rating ever recorded by Consumer Reports magazine.

This year, Tesla expects to deliver 21,000 of its Model S electric sedans and double that volume next year as sales in Europe and Asia expand.