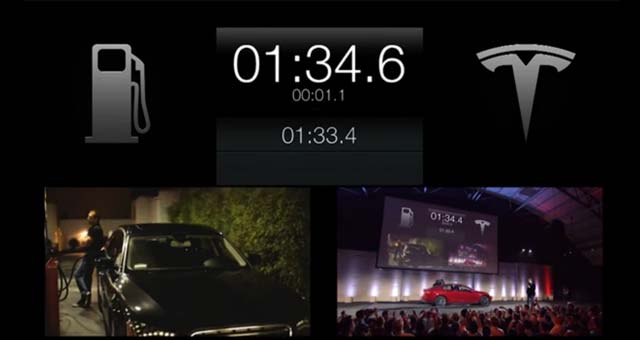 Tesla Motors unveiled on Thursday a system to swap battery packs in its Tesla Model S in about 90 seconds.

Tesla’s Chief Executive Elon Musk demonstrated two Model S battery pack swaps in the time it took for a car on a screen above the stage to fill up with gas, about four minutes.

A battery pack swap will cost between $60 and $80, about the same as filling up a 15-gallon gas tank, Musk said.

Tesla Motors will roll out the battery-swapping stations later this year, beginning along the heavily-traveled route between Los Angeles and San Francisco and then in the Washington-to-Boston corridor.

Battery-swap stations will be located alongside Tesla’s fast-charging stations, which take around 30 minutes to charge the car’s battery. Each station battery-swap will cost roughly $500,000 to build.