Are US electric car manufacturers putting the squeeze on the government? 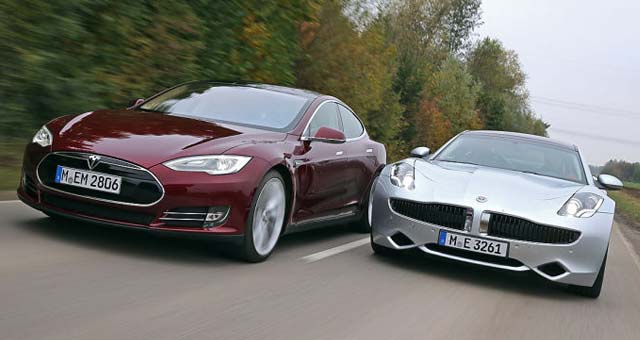 While the US government has in public been very supportive of the electric vehicle market there were signs that perhaps this support was starting to wane. In light of the Fisker debacle, which has put at risk a near $200 million loan from the US government, there is political pressure for US taxpayer exposure to electric vehicles to be reduced. At a time when the industry is striving to move forward it seems as though the US government may temporarily be putting a brake on funding programmes.

Even though this break is likely to be short-term, while Congress investigates an array of issues relating to the Fisker debacle and other similar loans, it is no surprise to see the likes of General Motors and Tesla Motors step up to the mark.

One of the major concerns is the fact that additional taxes levied at electric vehicles will ultimately make them less attractive in the short term, reduce the return on investment for US taxpayer loans to the industry and could effectively scupper any short-term plans for a big sales push. While there is no doubt that electric vehicles will at some stage need to at least partially make up future reductions in gasoline taxes, as more people switch to electric vehicles, perhaps now is too soon?

Direct sales to the public
Elon Musk, the chief executive officer of Tesla Motors, has been very vocal over the last few weeks with regards to ancient car dealership laws which restrict direct vehicle sales to the general public. He has gone head-on with a number of states across the US and while he attempted to table a motion with the Texas authorities the fact that this did not even make it onto the debating floor just about says everything.

Elon Musk is concerned that car dealerships are not pushing electric vehicles hard enough, this extra layer of cost is impacting sales and allegedly the oil industry is pulling the strings yet again. While the idea of dealerships, as a means of ensuring sales and backup services are always available, seems to make sense, if Tesla, amongst other electric vehicle manufacturers, is willing to put in place similar services then where is the problem?

At this moment in time it seems as though the leader of Tesla Motors is fighting a losing battle, it seems as though he has bitten off more than he can chew and we are unlikely to see any major changes in the short to medium term. However, recent polls suggest that the US public are now latching onto this story and the fact that the additional layer of cost associated with car dealerships across America is impacting the end retail price. Will public power now get behind Elon Musk and create a momentum going forward?

The likes of General Motors, Ford and other major players in the industry are working with the government to bring about a new investment program specifically for battery technology. It will be interesting to see how far down the line the US government is willing and able to finance this technology. There are already signs of major breakthroughs with rumours of viable battery technology which could power electric vehicles up to 1000 miles per charge. While this type of technology is still some way from the commercial market this is the kind of news which will catch the eye of motorists and ultimately help the industry move forward.

Conclusion
For many months now Elon Musk has been something of a voice in the wilderness with regards to his support of the electric vehicle market. However, this week’s intervention by General Motors in relation to new electric vehicle taxes across the US has been welcomed with open arms by electric vehicle enthusiast.

It will be interesting to see how many other electric vehicle manufacturers, and related companies, join forces with General Motors and Tesla Motors and indeed whether they can force the US government to be more proactive with electric vehicles. We may be entering a critical time for the electric vehicle market but it is hard to get overexcited because we have been here on numerous occasions only for this support to falter and fade.