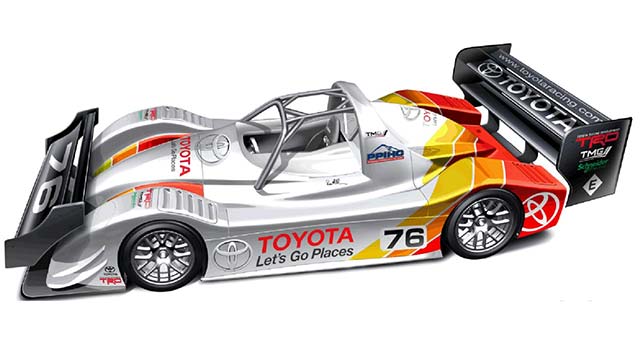 Based on data gained from last year’s record-breaking run of 10 minutes 15.380 seconds, engineers at TMG’s electric vehicle technology centre have generated more performance from the TMG powertrain to further improve that mark.

The TMG EV P002 is already the benchmark for electric race cars worldwide, having demonstrated true performance and versatility in establishing the current electric records at Pikes Peak and Nürburgring Nordschleife. The car is currently on its way to Salisbury, N.C., where TOYOTA Racing Development U.S.A. Inc. (TRD USA) will perform aerodynamic upgrades to the Radical-based chassis as well as track testing.

On June 30, just one week after TMG’s TOYOTA Racing team takes on the Le Mans 24 Hours with a hybrid prototype, Rod Millen will drive the TMG EV P002 at Pikes Peak. As a multiple record-setter at Pikes Peak and regular competitor in TOYOTA machinery, the 61-year-old New Zealander is highly experienced and will benefit from various improvements to the high-tech racer.

TMG has recent experience of delivering performance upgrades specific to a given track, having used data from its 2011 Nürburgring Nordschleife lap record to improve by more than 25 seconds a year later.

Motor speed and torque have been increased while the powertrain’s operating parameters have been tuned to better suit the challenge of the unique 19.99 kilometer Pikes Peak track, based on experience gained during last year’s class victory.

TMG support crew will further optimize the powertrain during the practice week prior to race day, while using experience gained from last year to assist their TRD USA colleagues in running the car.

Once again TMG is using its pioneering off-board battery-to-battery charging technology, including Schneider Electric EVlink™ DC Charger, to charge the TMG EV P002 from the mountainside, where there is no reliable connection to the power grid.

With varying current and voltage output, the TMG DC Quick Charger becomes an independent source of power for rapid recharging in any location, making it the perfect solution for electric motorsport.

Claudia Brasse, TMG Executive Coordinator Strategic EV Development:
“We are very excited to return to Pikes Peak alongside our TOYOTA colleagues from the United States. The TMG EV P002 has a perfect history of three records from three attempts, none of which have been beaten, so we have high standards to maintain. The improvements we have made to the powertrain are expected to deliver even higher performance levels, which should again confirm the TMG EV P002 as the standard bearer for electric race cars. But as well as the electric powertrain itself, we are successfully innovating in the area of charging infrastructure. It is easy to take this for granted when you are working in a well-supplied laboratory or workshop. But motorsport doesn’t always take place in such an environment; you have to deal with varying levels of infrastructure and uncertainty regarding the power grid. The potential for off-board battery-to-battery charging technology is great, particularly in the world of motorsport where infrastructure limitations will increasingly become a source of frustration for electric motorsport. We have a flexible solution which can be adapted for different types of race and passenger car. We look forward to again demonstrating both aspects of our EV technology at Pikes Peak.”