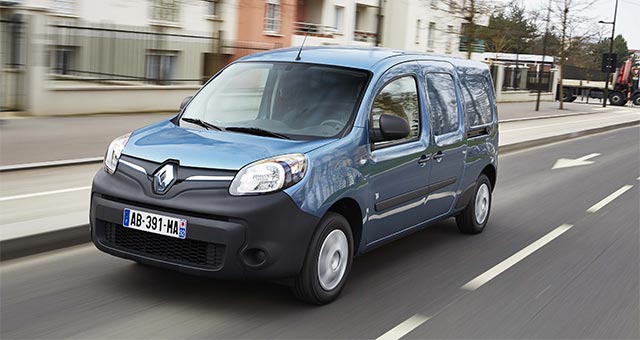 Like its predecessor, an all-electric version of New Kangoo Z.E. electric van is available with no detriment to carrying capacity.

New Kangoo Z.E.’s electric van credentials are signaled by the blue finish applied to the Renault

logo, to the two chrome strips either side of it and to the rear light extensions. The inside of the rear light clusters is also finished in blue-tinted chrome.

Taking a leaf from the ZOE’s book, its battery charging socket is now located behind the logo on the front grille. This is where the driver can connect the cable, supplied as standard with the vehicle, enabling recharging at home from a Wall Box in between six and nine hours or at a roadside charging station.

Thanks to the central location of the battery, below the floor, New Kangoo Z.E. features the same dimensions and carrying capacity as the internal combustion-engined model. The load volume ranges from 3.5 m3 while payload is 650 Kg.

The flat floor permits a maximum load length of 2.5m (with passenger seat folded flat) which is identical to that boasted by the internal combustion-engined version.

The width between the wheel arches is 1.21m, which enables a euro pallet to be loaded. The asymmetric rear doors, plus the sliding side door, enable easy access to the load area.

A new feature is the ‘Z.E. Voice’ sound which warns pedestrians of the vehicle’s approach to ensure stress-free motoring in built-up areas. This system functions at speeds of between 1 and 30kph and switches off when the vehicle is at a standstill.

Kangoo Z.E. is Europe’s best-selling electric van, with registrations totaling almost 8,200 vehicles, including approximately 4,700 in France. Of these, 1,800 were ordered by France’s postal service, La Poste.

In addition to the all-electric Z.E. version which emits no emissions during road use, the Renault Kangoo range features a comprehensive selection of energy-efficient engines, including three which top their class in terms of low fuel consumption, starting from 4.3 liters/100km.

Order books have been open in France since February, and New Kangoo is due to appear in showrooms across Europe from June 2013. 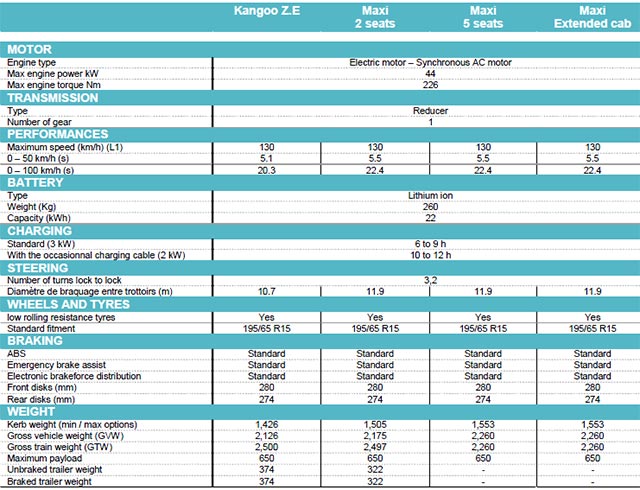