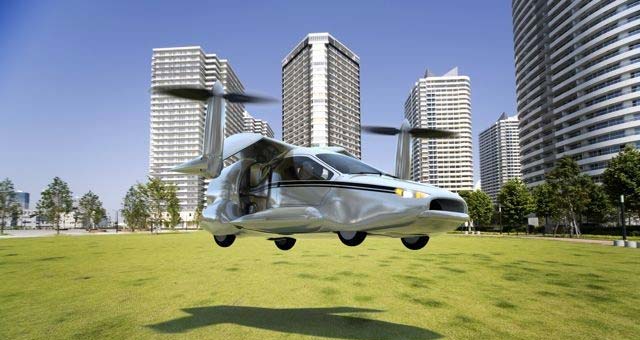 Terrafugia Inc., the developer of the Transition street-legal airplane, announced its plans for a four-seat, vertical takeoff and landing (VTOL) plug-in hybrid-electric flying car, known as the TF-X.

According to Terrafugia, the TF-X flying car would be capable of taking off and landing vertically, outside of an airport. The TF-X would have “fly-by-wire” controls that would let you set your destination, and have the vehicle navigate to it with minimal pilot involvement.

The Terrafugia TF-X flying car would be a plug-in hybrid outfitted with both batteries and an internal combustion engine, which would presumably have a 500 mile range, and speed of over 200 mph.

Animation of the TF-X in flight can be seen in the video below.

The TF-X flying car is still in its earliest stages of design, but the company is positive that the vehicle is “physically possible” using technology that is already available according to a company press release.

Terrafugia says the TF-X as the kind of vehicle that could usher flying cars into the mainstream. No specific date has been set for certification and initial production of the two-seater aircraft with folding wings, though Terrafugia said it’s nearing time for those steps.

“This is the right time for us to begin thinking about the future of the company beyond Transition development,” says Terrafugia CEO/CTO Carl Dietrich, “We are passionate about continuing to lead the creation of a flying car industry and are dedicating resources to lay the foundations for our vision of personal transportation.” Terrafugia’s design team is excited to be looking ahead to TF-X development activities as the Transition program shifts from research and development to certification, production, and customer support activities. The Transition serves as a Proof of Process for TF-X™ development and commercialization through the many technical, regulatory, and usage challenges it has overcome.

By directly addressing congestion and other transportation challenges currently being faced internationally, widespread adoption of vehicles like the Transition and TF-X could result in significant economic benefits and personal time savings. Preliminary conversations with the Federal Aviation Administration (FAA) about the TF-X concept have demonstrated their willingness to consider innovative technologies and regulatory solutions that are in the public interest and enhance the level of safety of personal aviation. Terrafugia is excited to be nearing production of the Transition and continuing to push the envelope of personal transportation. Dietrich adds, “Terrafugia is about increasing the level of safety, simplicity, and convenience of aviation. TF-X is an opportunity to provide the world with a new dimension of personal freedom!”

Terrafugia is an aviation startup based in Woburn, MA, founded by pilot-engineers from MIT.