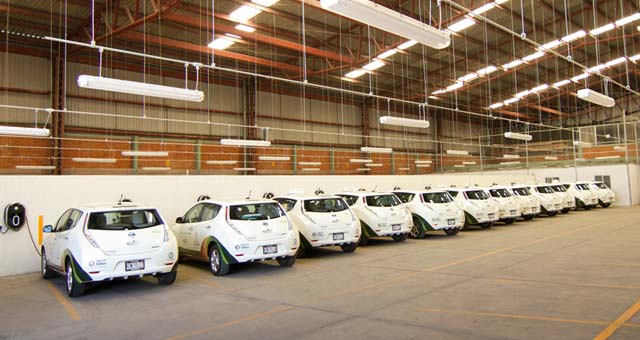 The fully electric Nissan LEAF has been zooming across the country of Mexico for months now.

So far, only taxi drivers and government officials in Mexico City and in Aguascalientes are driving them. But soon those in Mexico who want to drive a 100 percent pure electric car will be able to buy the Nissan LEAF. That is why the company is working hard to get more electric vehicle charging infrastructure in place.

There now is a charging center in Aguascalientes that services the 50 Nissan LEAF taxis in the area. There are also two quick chargers, one in the heart of Mexico City and another in the city of Aguascalientes, both for public use.

Nissan officials say they hope to expand taxi programs, and public charging, like this to other cities and other countries in Latin America.

“Aguascalientes has been the benchmark on those (EV taxis), Mexico City as well. And there are a lot of other requests from other countries. Colombia has been pushing very hard requesting a lot of vehicles,” said Jorge Vallejo, Nissan Mexicana’s director of Government Affairs. He added: “We are creating the first electric corridor in the entire Latin America region. It’s going to run from Mexico City up to Cuernavaca where we (Nissan) have another manufacturing facility.”

The Nissan LEAF will go on sale at dealerships in Mexico late this year.