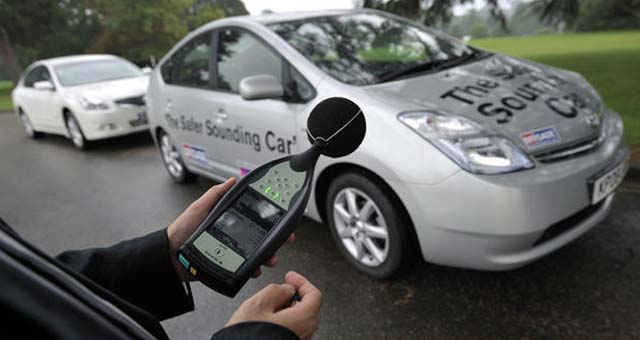 Hybrid and plug-in electric vehicles, which have soundless engines, would need to make noises to let pedestrians know they’re near, under the U.S. National Highway Traffic Safety Administration rule.

Under the rule, sounds would need to be detectable when vehicles are traveling slower than 18 miles per hour, so hybrid and electric vehicles can be heard by bicyclists and pedestrians, particularly the visually impaired.

At 18 miles per hour and above, vehicles make sufficient noise to allow pedestrians and bicyclists to detect them without added sound. Each automaker would have a significant range of choices about the sounds it chooses for its vehicles, but the characteristics of those sounds would need to meet certain minimum requirements. In addition, each vehicle of the same make and model would need to emit the same sound or set of sounds.

Hybrid and electric vehicles do not rely on traditional gas or diesel-powered engines at low speeds, making them much quieter and their approach difficult to detect. The proposed standard, Federal Motor Vehicle Safety Standard No. 141, would fulfill Congress’ mandate in the Pedestrian Safety Enhancement Act that hybrid and electric vehicles meet minimum sound requirements so that pedestrians are able to detect the presence, direction and location of these vehicles when they are operating at low speeds.

NHTSA estimates that if this proposal were implemented there would be 2,800 fewer pedestrian and bicyclists injuries over the life of each model year of hybrid cars, trucks and vans and low speed vehicles, as compared to vehicles without sound.

Quiet cars are twice as likely as vehicles with internal- combustion engines to be involved in pedestrian accidents when backing up, slowing or stopping, starting in traffic or entering or leaving a parking space or driveway.