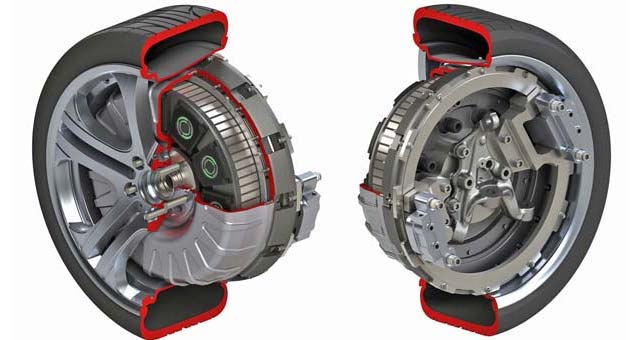 Protean Electric today announces the debut of its production in-wheel motor at the 2013 Society of Automotive Engineers World Congress.

Protean’s in-wheel electric drive system is an award-winning technology that is an integral part of a hybrid powertrain system when paired with a traditional internal combustion engine. It is also powerful enough to be the only source of traction drive in electric vehicles.

The motors reside in the space behind the wheel, producing torque and power exactly where and when drivers need it. Protean’s new production motor provides a 25 percent increase in peak torque compared with the previous generation’s design and can deliver 1,000 Nm (735 lb.-ft.) and 75 kW (100 hp).

– Highest torque density of any of today’s leading electric drive systems
– 75 kW (100 hp) peak power and 1,000 Nm (735 lb.-ft.) peak torque in each motor
– Mass of only 31 kg (68 lbs.) per motor
– Fuel economy improvements up to 30 percent in hybrid configurations, as compared to the existing vehicle, depending on battery size
– Superior regenerative braking capabilities, which allow up to 85 percent of the available kinetic energy to be recovered during braking

Protean has been awarded 25 patents for its unique technology and design, and 84 additional patent applications have been filed internationally and with specific countries in North America, Europe and Asia. Protean has won the prestigious 2012 Technology Pioneers Award from the World Economic Forum and received recognition from Car and Driver magazine as one of the ten most promising technologies for 2013.