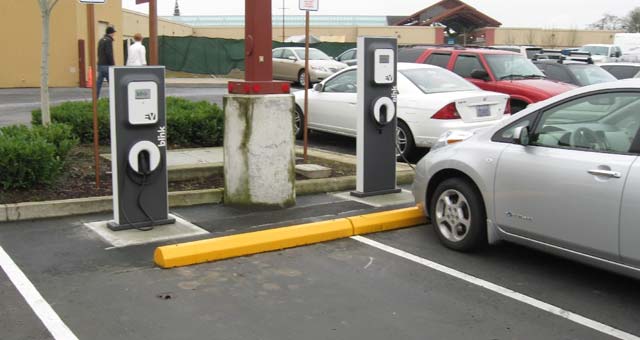 ECOtality Inc. announced Monday that it plans to install about 225 EV chargers at Kroger Stores, mostly in California and Arizona.

Adding 200 level 2 (quick charge) EV chargers and 25 DC Fast Chargers in markets will bring the total number at the nation’s largest grocery chain to about 300.

Details of the agreement include a $1.5 million investment by Kroger to install over 200 Blink EV chargers, including 25 DC Fast Chargers, at 125 locations in several key markets including Phoenix, San Diego and Los Angeles. These stations are in addition to 60 already installed in Oregon and Washington, and 14 in Texas.

“As plug-in electric and hybrid cars are becoming more popular with our customers, we are pleased to offer the convenience of electric vehicle charging stations at more of our stores in markets with the highest demand,” said Keith Dailey, Kroger spokesperson. “Kroger is excited to contribute to the growth of this national network.”

“Retailers across the country are quickly realizing the benefits of installing our Blink chargers. Independent research shows that Blink card holders routinely reward these establishments with more time in their stores and repeat business,” stated Ravi Brar, CEO of ECOtality Inc.

“Kroger not only recognizes this value, but continues to show its commitment to be a leader in sustainability for the food retail industry. We are thrilled that the nation’s largest supermarket chain, Kroger, chose to expand its EV charging station roll-out with Blink.”

ECOtality has about 4,000 public chargers, a figure that may expand to 5,000 by the third quarter.

Kroger uses data from the charging stations to study the shopping habits of electric-vehicle-driving customers, who typically spend 30 minutes longer in stores than owners of gas- powered vehicles, said Brian Koontz, ECOtality’s director of strategic corporate development. Kroger may eventually use the information to promote specific products to those drivers.

ECOtality last month announced an agreement to link its network with ChargePoint Inc. giving drivers access to about 90 percent of the approximately 15,000 stations in the U.S.