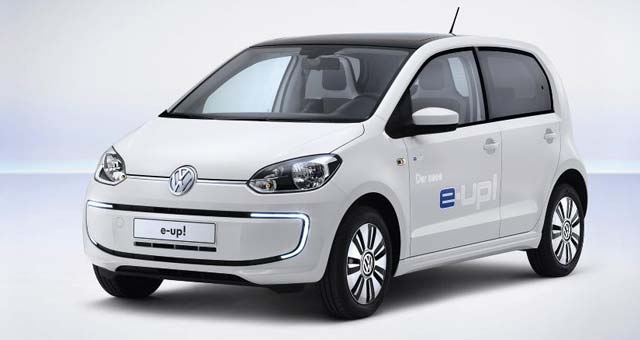 VW has revealed pictures and details of a pure-electric version of the up! city car, called the Volkswagen e-up!

The all-electric Volkswagen e-up! is powered by an electric motor with 60 kW/81 HP peak power – without any disturbing gearshift interruptions or powertrain noise. Its continuous power is 40 kW/54 HP. Its maximum torque of 210 Newton meters is available immediately with the first revolution.

The lithium-ion battery integrated in the underfloor area has a total energy storage capacity of 18.7 Kilowatt-hours (kWh); this means that the car can cover up to 150 km (93 miles), per NEDC, on a single charge thanks to its low vehicle weight of 1,185 kg.

The port for charging the battery in the Volkswagen e-up! is hidden behind the ‘fuel filling flap’. As an option, the Combined Charging System (CCS) is used, which has been standardized by Volkswagen and other carmakers. It supports both DC and AC charging, so that drivers can easily charge their cars at most charging stations – regardless of the power sources or charging rates that they offer.

The styling of the Volkswagen e-up! is subtle and expresses high quality. One distinctive exterior feature is the curved layout of the LED daytime running lights in the front bumper. In addition, the front end, sills and underbody have been aerodynamically optimised.

The e-up! can be made out at first glance by its machine-polished 15-inch alloy wheels, Volkswagen emblems with blue backgrounds and an e-up! logo at the rear.

The vehicle’s interior features e-up! light-grey seat covers with blue top-stitched seams. Special leather and chrome accents have been used to convey a puristic impression that matches the vehicle concept of a full-fledged urban electric car.

In autumn, the new Volkswagen e-up! will make its show debut at the 2013 Frankfurt Motor Show and following this will become available to order.[wzslider height=”400″ lightbox=”true”]