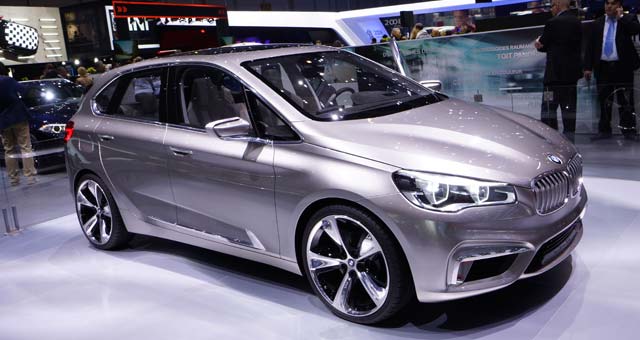 BMW will introduce the Concept Active Tourer for the first time in North America in two weeks at the 2013 New York Auto Show.

Offering a glimpse of further innovations in store for the premium compact segment, BMW introduces the Concept Active Tourer – a new plug-in hybrid concept which combines comfort and functionality with dynamics and style while showcasing several innovative solutions.

The Concept Active Tourer will also feature a “Cool Shade” composite glass roof which uses “Suspended Particle Device” technology allowing the driver to make the roof crystal clear or darken with the touch of a button.

The diesel-powered BMW 328d will also make its U.S. debut at this year’s New York Auto Show, joining the BMW 3 Series lineup and strengthening BMW’s position as one of the country’s most efficient automakers.  The BMW 328d will be powered by a TwinPower Turbo 4 cylinder engine, delivering 180 hp and an impressive 280 lb-ft of torque – propelling the vehicle from 0 to 60 mph in about 7.2 seconds while getting mileage that could well exceed 40 mpg (official US EPA estimates will be available closer to the launch of the 328d).  With the hallmark performance of a BMW 3 Series and increased efficiency of a diesel engine, the BMW 328d will serve as the new benchmark in its class.[wzslider height=”400″ lightbox=”true”]