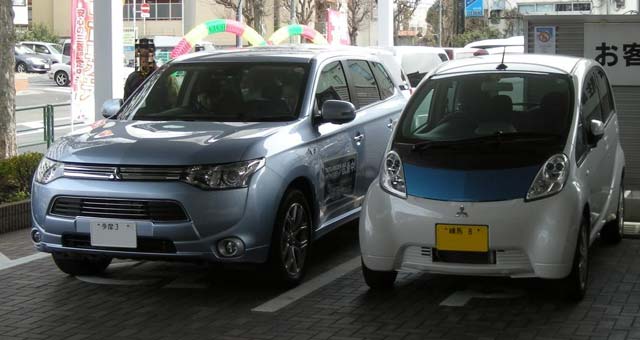 Mitsubishi Motors Corp. has suspended production of its Outlander PHEV crossover and a variant of its i-MiEV electric car after one lithium ion battery melted at a dealership and another caught fire in an assembly plant.

The batteries involved in the incidents were made by Lithium Energy Japan, a venture between GS Yuasa, Mitsubishi Motors and Mitsubishi Corp. Company investigators are working to identify the cause of the problem.

The incidents are the latest involving the Kyoto-based company’s batteries as U.S. and Japanese authorities probe the cause of overheated units that grounded Boeing’s Dreamliners in January.

The battery in the i-MiEV caught fire at Mitsubishi Motors’ Mizushima plant in Okayama Prefecture on March 18 when it was being charged during a test before installation in the vehicle.

Although the battery and cable were charred, no one was injured.

The Outlander PHEV battery, which was taken apart, showed signs of a short circuit in the interior wiring. When the battery pack was examined by the supplier, it was found that one of the battery pack’s 80 cells had overheated, melting adjacent cells. The 80 cells in the drive battery pack are divided and set into three “blocks” within the drive battery pack. In the past, defective batteries were discovered on the same production line after impurities became mixed in the battery interior. Drivers have been advised not to recharge their Outlander plug-in hybrids through its plug. They should also turn off the electric-only drive mode and disable the function that allows the engine to recharge the battery while driving.

The Outlander PHEV, sold only in Japan, is scheduled to arrive in the United States next year.

The battery glitch is not expected to delay the U.S. launch. Mitsubishi has yet to determine the cause of the problem but hopes to restart production within weeks, Koketsu said.

The Outlander PHEV went on sale in Japan on Jan. 24 and Mitsubishi has sold 4,000. That is nearly double the total of the standard gasoline-only Outlander, which has sold 2,500 vehicles in Japan since it went on sale here in October. All of the 4,000 Outlander PHEVs sold so far could potentially be affected by the problem.

The i-MiEV and a commercial vehicle variant called the Minicab come in two trim levels. The upper trim, which gets a bigger, more-powerful battery, uses the Lithium Energy Japan power pack. The lower trim uses a less-powerful battery made by Toshiba. Mitsubishi has halted production of only the vehicles with the Lithium Energy Japan-made batteries. The Toshiba batteries apparently are fine.