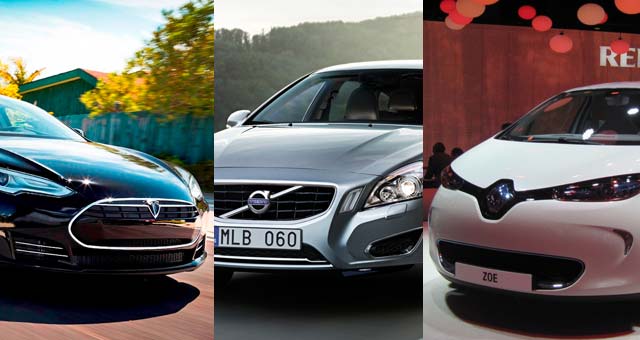 The shortlist for the 2013 World Green Car of the Year award was announced at the 2013 Geneva Motor Show.

The top three finalists for the 2013 World Green Car of the Year Award are: the Renault Zoe, the Tesla Model S and the Volvo V60 Plug-in Hybrid.

Each of the finalists for the 2013 World Green Car of the Year award are high quality plug-in electric vehicles that either are or will soon be available to buy.

Electric Cars Report will announce the winner once it has been officially awarded at the 2013 New York Auto Show on 28th March.

The annual awards cover three key car categories – World Green Car, World Performance Car and an overall World Car of the Year. There is also a World Design of the Year award.

To be eligible for the overall World Car of the Year award, the candidates must become available for sale on at least two continents during the period beginning January 1, 2012 and ending May 30, 2013.

2013 World Car of the Year finalists are: the Mercedes-Benz A-Class, Porsche Boxster/Cayman, the combined entry Scion FR-S/Subaru BRZ/Toyota GT86 and the Volkswagen Golf.

The top three finalists for the 2013 World Performance Car award are: the Ferrari F12 Berlinetta, Porsche Boxster/Cayman and the combined entry Scion FR-S/Subaru BRZ/Toyota GT86. Entrants may be chosen from that list of eligible vehicles, or they may be newly introduced variants that satisfy the same criteria, but are derived from existing rather than brand-new models. In all cases, they must have a minimum annual production rate of five-hundred vehicles.

Cars eligible for the 2013 World Car Design of the Year award are taken from the list of World Car candidates or they may be included as a stand-alone entry provided the vehicle is introduced and available for sale in at least one major market during the period beginning January 1, 2012 and ending May 30th, 2013.