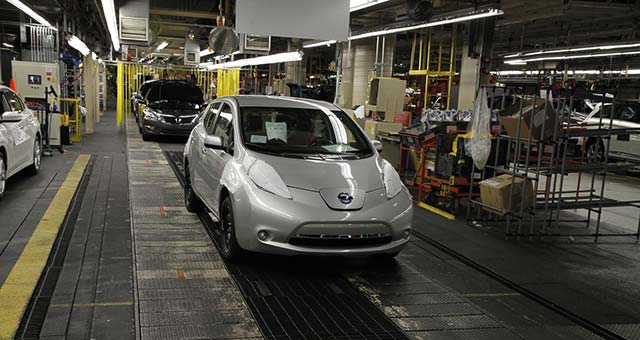 Nissan announced on Wednesday that production of the 2013 Nissan LEAF electric car had begun at its manufacturing plant in Smyrna, Tenn., where it will be manufactured alongside the company’s gasoline-powered products.

The start of Nissan LEAF assembly in Smyrna comes on the heels of the opening of Nissan’s battery plant in an adjacent facility. Nissan is the only automaker that manufactures its own electric vehicle batteries, at the largest lithium-ion automotive battery plant in the U.S.

LEAF assembly in Smyrna will contribute to Nissan’s goal to manufacture 85 percent of its U.S. sales volume in North America by 2015, and having more local content will reduce exposure to fluctuations in foreign currency. The addition of LEAF and battery assembly has resulted in the creation of more than 300 U.S. manufacturing jobs, a number that can increase with demand.

The 2013 Nissan LEAF boasts innovative features such as 240V charging that is nearly twice as fast as the previous model, as well as a broader range of trim levels starting with the even more affordable S grade, moving up to the SV model and graduating with the top-of-the-line SL.

After two years on the market, the Nissan has become the global leader in electric-vehicle sales with about 50,000 LEAFs sold to date, of which 19,500 LEAFs are on the road in the United States.[wzslider height=”400″ lightbox=”true”]