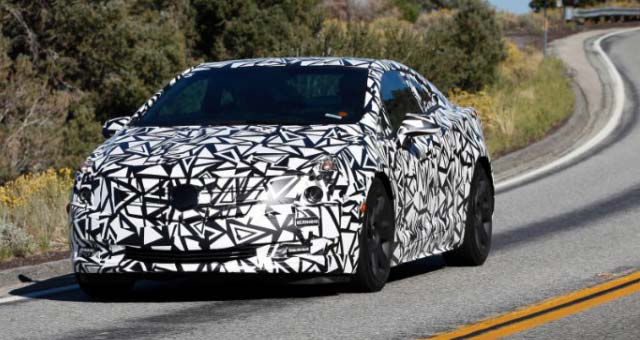 GM has released a photo of the camouflaged Cadillac ELR driving through the mountains of Southern California during development testing.

Last month, GM had released a first teaser image of the 2014 Cadillac ELR, a shadowy side-profile shot that confirmed its essential shape.

The Cadillac ELR will make its official public debut at the 2013 Detroit Auto Show next week.

The ELR is the production version of Cadillac’s Converj, a concept vehicle revealed at the North American International Auto Show in 2009.

The ELR will advance the design theme of the Converj while featuring an electric propulsion system made up of a T-shaped lithium-ion battery, an electric drive unit, and a four-cylinder engine-generator. It will use electricity as its primary power source to drive the car without using gasoline or producing tailpipe emissions. When the battery’s energy is low, the ELR seamlessly switches to a gasoline-powered electric generator to allow hundreds of additional driving miles. The lithium-ion battery will be built at GM’s Brownstown Battery Assembly plant in Brownstown, Mich.

The 2014 Cadillac ERL extended-range electric luxury coupe will be built alongside the Chevrolet Volt and Opel Ampera at GM’s Detroit-Hamtramck plant starting later next year.