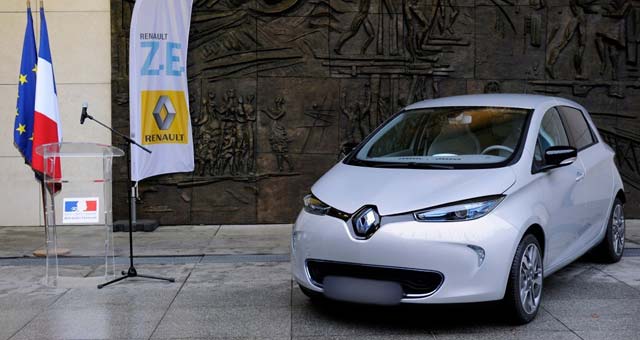 Renault has presented the keys of the first ZOE EV to Arnaud Montebourg, French Minister of Industrial Recovery.

After ordering the Renault ZOE electric vehicle at the Paris Motor Show in September 2012, Arnaud Montebourg, Minister of Industrial Recovery, was presented today with the keys to the first ZOE in the Cour d’Honneur of the Bercy Finance Ministry by Carlos Tavares, Chief Operating Officer of the Renault group.

The first delivery of ZOE, the first broadly affordable full-electric car, comes ahead of further deliveries set for between now and the end of 2012 and mass launch in the French Renault network in first-quarter 2013.

ZOE, the spearhead of Renault’s Z.E. range, is the Group’s first full-electric car. In France, the widely affordable car qualifies for a €7,000 government environmental bonus, bringing the starting price in France down to €13,700 (including VAT).

ZOE EV targets private buyers and business customers alike. It is ideal for daily journeys and embodies Renault’s excellence in electric technology. The mobility-enhancing model features the most advanced technology in terms of range, user friendliness (with the installation of a charging station at motorists’ homes or workplaces) and connectivity. It is a key symbol of the Group’s commitment to the electric revolution.

The launch will be accompanied by the widespread development of public and private charging stations with the support of the taskforce headed by Philippe Hirtzman and tasked with stimulating and backing infrastructure projects in large urban agglomerations.