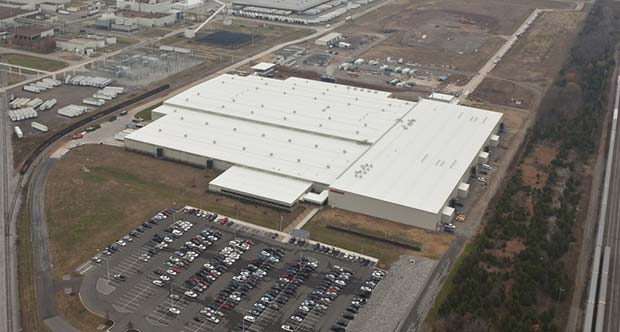 The facility – which is making battery components for the ramp-up of production of the all-electric, zero-emission 2013 Nissan LEAF early next year – is one of three of its kind in the world operated by a major automaker.

Since December 2010, Nissan has delivered more than 18,000 LEAFs to U.S. customers and more than 46,000 worldwide, making it the most successful 100-percent electric vehicle in history.

The first batteries produced at the plant have completed the required aging process and are now ready to receive their first charge. The state-of-the-art facility is capable of expanding to produce modules for up to 200,000 batteries annually depending on market demand. Those batteries can serve as the power source for the all-electric Nissan LEAF and for future vehicles that could be added to the portfolio.

“Opening this U.S. plant is an important milestone in Nissan’s overarching strategy to foster sustainable mobility around the world,” said Carlos Ghosn, president and chief executive officer of Nissan Motor Co. “Nissan is the zero-emissions vehicle leader, and we are making significant strides as one of the largest producers of electric vehicles and batteries in the United States. The opening of this facility in Tennessee supports our goal of making zero-emissions mobility a reality through American jobs and American manufacturing.”

The new battery plant is located adjacent to Nissan’s existing vehicle assembly plant in Tennessee, which has been retooled to accommodate production of the Nissan LEAF. Adding production of the Nissan LEAF and the battery has resulted in the creation of more than 300 U.S. manufacturing jobs to date. As battery production and LEAF assembly expand to accommodate demand, combined operations could add up to 1,000 additional jobs as needed.[wzslider height=”400″ info=”true” lightbox=”true”]The Nissan LEAF is manufactured on the same line as Altima and Maxima so volume can readily be adjusted among the vehicles to meet demand. The 2013 model-year Nissan LEAF will receive a number of technological advancements and feature changes, which will be announced closer to the vehicle’s on-sale date in early 2013.

Combined, the construction of the battery plant and modification of the Smyrna manufacturing facility represent an investment of up to $1.7 billion when built to full capacity. The project is supported by a U.S. Department of Energy loan for up to $1.4 billion.