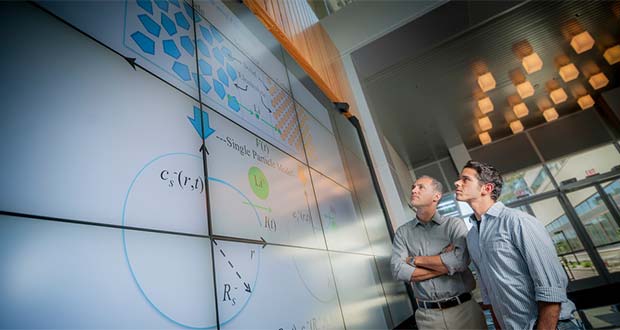 Engineers at the University of California, San Diego, have developed sophisticated estimation algorithms that allow lithium-ion batteries to run more efficiently, potentially reducing their cost by 25 percent and allowing the batteries to charge twice as fast as is currently possible.

The researchers at the Jacobs School of Engineering at UC San Diego are sharing a $9.6 million grant from ARPA-E, a research agency within the Department of Energy, with automotive products supplier Bosch and battery manufacturer Cobasys to further develop the estimation algorithms and the technology they will drive.

UC San Diego’s share of the grant is $460,000 for the research group of Professor Miroslav Krstic and UC President’s Postdoctoral Fellow Scott Moura in the Department of Mechanical and Aerospace Engineering at the Jacobs School.

“This research is bringing the promise that, with advanced estimation algorithms that are based on mathematical models, batteries can be charged faster and can run more powerful electric motors,” said Krstic, who is also associate vice chancellor for research at UC San Diego. “This technology is going into products that people will actually use,” said Moura, the co-lead researcher on the project.

Krstic and Moura are taking a unique approach to making lithium-ion batteries more effective. Instead of monitoring voltage and current, they have designed sophisticated algorithms that can estimate what is physically going on inside the lithium-ion battery.

Current technology
Manufacturers usually rely on voltage and current to monitor the battery’s behavior and health. But those are very crude measures, said Krstic. Relying on these measures leads to over-designed, oversized batteries that weigh and cost more. They also take a long time to charge, compared with gas-powered vehicles. Toyota recently canceled mass production of its second all-electric car, the eQ, citing concerns over the viability of electric vehicle technology, including the amount of time vehicles take to charge.

Lithium-ion batteries are cylindrical and made of three sheets rolled together, very much like a jelly roll. One layer is the anode, another layer acts as a separator and yet another layer is the cathode. When the battery is fully charged, the lithium ions are stored at the anode. The battery is designed so that the ions want to move from the anode to the cathode, powering the device it’s connected to in the process. To know whether the battery is functioning properly, it’s important to know where the ions are in the anode. But that’s very difficult to measure, even with sophisticated equipment. The ions are usually lodged deep inside irregularly-shaped particles within the anode.

Trying to estimate the particles’ charge by measuring only the voltage on the battery is similar to having the person that collects tickets at the entrance to a movie theater try to estimate which of the seats the patrons are taking by watching the speed at which the line at the entrance is moving, Moura said. In this analogy, the ions are patrons making their way to seats within each row, which represent the particles.

Enter the estimation and control algorithms Krstic and Moura developed. The algorithms allow researchers to estimate where the particles are. So the movie theater can now be filled to capacity safety and efficiently. The model can also estimate how the health of the battery evolves over time-the equivalent of which seats are breaking down in the theater and need to be fixed or replaced.

The grant will allow researchers to refine the algorithms and to test them on actual batteries on testbeds developed by Bosch and Cobasys. They will estimate the charge distribution within the battery. Then they will estimate its state of health. Finally researchers will devise a strategy to find optimal rates of charging and discharging batteries.

By testing their algorithms on electric vehicle batteries and comparing their performance to an electric battery run with existing technology, Krstic, Moura and colleagues plan to formulate a strategy to charge and use batteries to their maximum potential-safely.