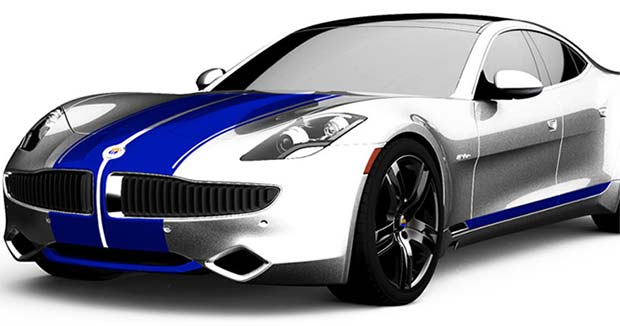 Several examples of the Karma – Top Gear’s Luxury Car of the Year — will be on display during the SEMA Show at the Las Vegas Convention Center October 30 through November 2, 2012.

Fisker Diamond Protection Film is a durable, virtually invisible paint protection film that helps maintain the Karma’s dramatic design aesthetic and resale value by preventing rock chips and damage from other road debris. It is backed by a five-year warranty when installed by an authorized 3M technician at any of Fisker’s retail locations around the world.

To highlight the partnership, Fisker designers worked with 3M Commercial Graphics and their Scotchprint Wrap Film Series 1080 to develop four wrap schemes for a Karma that will be on display at the 3M display (North Hall Booth 12227).

SEMA attendees will have the opportunity to watch as this Karma gets “painted” in a new scheme every 24 hours.

Fisker also said that it will use Mobil 1 for its 2.0-liter range-extending generator, and that the synthetic formula increases efficiency and lasts longer than standard oil.

As for the wheels, the company has one 22-inch option. Now Fisker is partnering with Goodrich Technology, using its PermaStar chroming process to produce a show-quality shine while producing no hazardous waste.[wzslider height=”400″ lightbox=”true”]