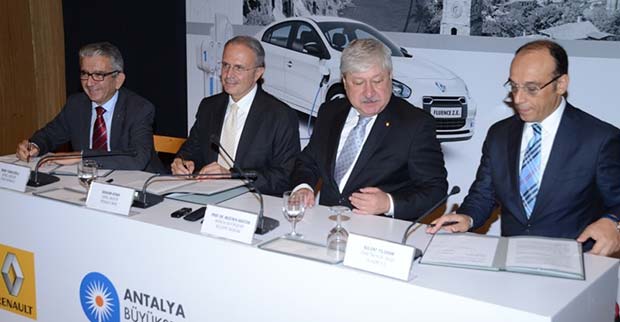 French carmaker Renault and the city of Antalya have partnered for the promotion and deployment of the environmental friendly electric vehicles in the Turkey’s capital of tourism.

The partnership program will focus on the establishment in the territory of the prefecture of Antalya of a substructure of charging points for electric vehicles manufactured in Bursa Oyak Renault Automobile Plants since the end of 2011.

Reinforced by this synergy between Renault and the Antalya Metropolitan Municipality, the parties have decided to start a work to promote electric vehicles which are manufactured in Oyak Renault Automobile Plants in Turkey within the boundaries of Antalya in order to reduce CO2 emissions and the effects of global warming. To this end, a team will be set up until the end of 2012 in order to achieve concrete results regarding the establishment of an infrastructure that will allow the use of electric vehicles in the city.

Thus, the task force will be responsible for making proposals, including: