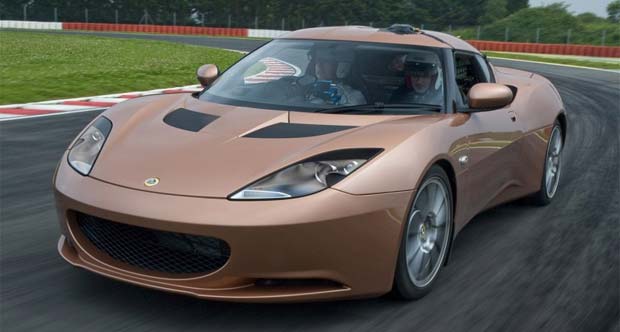 Development of the Lotus Evora 414E range-extender hybrid electric vehicle (REEV) has progressed from the show stand to the test track starting its dynamic and durability testing at Lotus’ headquarters in the UK.

The Lotus Evora 414E, which debuted 2010 Geneva Motor Show, is similar to range-extended Chevrolet Volt and Fisker Karma electric cars in that a small gasoline engine – in this case one with only three cylinders – takes over to power a generator when the batteries are depleted that, in turn, motivates the electric motor.

The Evora 414E is powered by two electric motor packs driving the rear wheels through its Xtrac transmission with a battery pack that can be charged by the Lotus range extender engine or directly from mains electricity.

The Lotus 3 cylinder range extender engine has been design protected to run on either gasoline or renewable bio alcohol fuels (methanol and ethanol). It drives an EVO electric generator which produces electrical energy to either charge the battery pack or power the EVO traction motors directly.

In normal driving, the Evora 414E will run purely on electricity stored in the battery pack for up to 30 miles (48 km). With the Lotus range extender and the electric traction motors powering the vehicle through an Xtrac 1092 transmission, the Evora 414E is targeted to produce just 55 g of CO2 / km emissions on the Northern European Driving Cycle (NEDC).

Should the driver require more performance, under hard acceleration, for example, the electricity will come from both the battery storage and the small range extender engine.

The Lotus Evora 414E promises supercar performance with 408 horsepower and a truly explosive 738 pound/feet of torque. Lotus says this is sufficient to rocket the diminutive and lightweight Evora 414E to 60 mph (100 km/h) in around four seconds. Top speed is estimated at 130 mph (209 km/h).[wzslider height=”400″ lightbox=”true”]