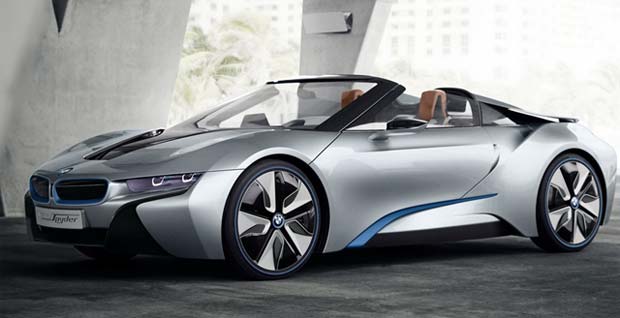 The awards are given to the best Production Preview Vehicle, Concept Car, Concept Truck, and Most Significant Concept Vehicle of each auto show season.

The awards recognize those vehicles most likely to shape the future of the automobile industry. This year, more than two dozen jurors participated in a selection process that involved a total of 34 vehicles, each introduced to North America during this season’s auto shows in Los Angeles, Detroit, Chicago, Toronto, and New York.

The Concept Car category recognizes those vehicles where passenger carrying is the primary intent. To be eligible for the awards, a concept vehicle must make its North American debut during the current model year’s auto show season.

“With lines that remind me of icy water in a mountain stream, the BMW i8 takes open top driving into a new realm of environmental responsibility, with the mission of the ultimate driving machine firmly embedded,” said juror Bill Schaffer. Juror Chris Poole states, “The i8 Concept Spyder wraps innovative construction and powertrain technologies in a functional, eye-catching new design language that will be exclusive to the upcoming eco sub-brand it previews. It’s an impressive blend of supercar style and speed with future-oriented mpg and emissions performance”.

Compared with the Coupe variant, the BMW i8 Concept Spyder has a slightly shorter wheelbase and overall length. With its compact dimensions and distinctive exterior paintwork, the sports car exudes a feeling of dynamism before it so much as turns a wheel, while striking features of its design include upward-swivelling, windowless doors and a transparent glass panel at the rear.

The BMW i8 Concept Spyder is a plug-in hybrid combining two different power sources and employing the specific advantages of its electric motor and combustion engine to optimum effect. The hybrid drivetrain’s key components gel together with outstanding smoothness, allowing it to offer peerless dynamic capability and maximum efficiency. In other words, the open-top two-seater produces the performance of an out-and-out sports machine yet posts the fuel economy of a small car.

The 96 kW (131 hp) electric motor on the front axle works in tandem with a turbocharged three-cylinder petrol engine sending 164 kW (223 hp) through the rear wheels. Both units are in-house BMW Group developments and generate an aggregate system output of 260 kW (354 hp) and peak torque of 550 Newton meters. That is enough to accelerate the BMW i8 Concept Spyder from 0 to 100 km/h (62 mph) in five seconds on the way to an electronically governed top speed of 250 km/h (155 mph). Despite this performance, the two-seater burns just three liters of gasoline per 100 kilometers (equivalent to fuel economy of 94 mpg UK or 78mpg US) in the European test cycle.

With its battery fully charged, the BMW i8 Concept Spyder can cover up to 30 kilometers (19 miles) on electric power alone. As such, far from filling in as a bit-part player, the electric motor plays a role equal to that of the petrol engine. If required, a high-voltage alternator hooked up to the combustion engine generates extra power, which is then stored in the hybrid battery. This range-extending function during the course of a journey allows the two-seater to travel further between charging stations.