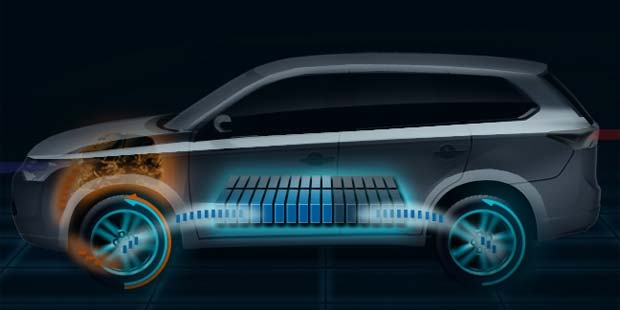 Mitsubishi will continue to roll out its ambitious, global and green new product generation at the 2012 Paris Motor Show with a series of significant premieres, including the debut of the all-new Outlander Plug-in Hybrid EV.

Neither a mere adaptation of an existing Internal Combustion Engine (ICE) – powered vehicle, nor a dedicated Plug-in Hybrid technology showcase, the new Outlander Plug-in Hybrid EV (or “PHEV”) will share its architecture with the soon-to-be-introduced New Outlander’s ICE versions – an engineering feat in itself.

As such, the Outlander Plug-in Hybrid EV will be the first mainstream car from a major manufacturer envisaged from the outset with built-in provisions for either ICE or PHEV powertrains.

Mitsubishi has already had a couple of stabs at Outlander PHEV, with the PX-MiEV at the Tokyo Motor Show in 2009 and then again with the PX-MiEV II at last year’s Tokyo Show. But now we’re about to get the production version.

The electric motor on the new model will be supplemented by a petrol engine which, Mitsubishi says, is “more suited to global markets than diesel”. It will also be the first permanent 4WD electric car in series production.

When fitted to the new Outlander, the Mitsubishi Plug-in Hybrid system will allow for a long haul range and very low emissions similar to that of the Concept PX-MiEV II show car, i.e. a driving distance of over 800 km (497 miles) and a CO2 target below 50 g/km.

Whilst the new Outlander ICE will start its commercial career in Western & Eastern Europe in the fall of 2012, the Outlander Plug-in Hybrid EV will be retailed in Europe during the course of 2013.