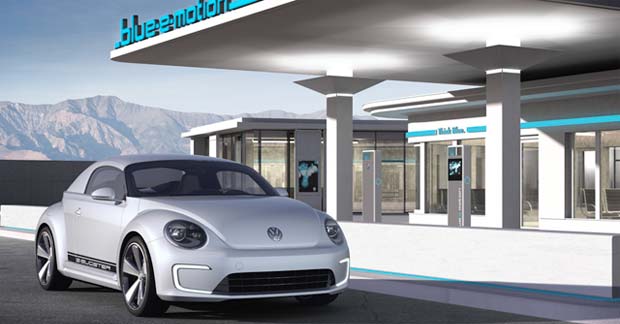 Volkswagen’s iconic Beetle has been redefined for the 21st century – now, it has been further reinvented as a concept car for the future: the pure electric E-Bugster Concept.

The E-Bugster was specially designed for this mission: a two-seat Beetle speedster, 85 kW in power, 0 to 60 mph in 10.9 seconds, with zero emissions yet the sharpest of proportions.

The central electric module of the E-Bugster has an innovative design; it weighs just 80 kg. The energy for powering the electric motor is stored in a lithium-ion battery whose modules are housed in a space-saving location behind the front seats. The battery’s energy capacity of 28.3 kWh enables a range of at least 110 miles (180 km) in the urban world.

And even in an enormous country like the USA, for the majority of commuters this distance is sufficient to drive to their workplaces and return home. Since the Volkswagen has a quick charging function, the battery can be ‘refueled’ within 35 minutes at suitable charging stations. At home, the battery of the E-Bugster can also be charged from the 120-Volt outlets that are usual in America (or from 230-Volt outlets in Europe). The interface for the charge cable is located below the normal ‘fuel door’ position near the C-pillar.

Just how much energy the driver of the E-Bugster is requesting with the ‘electric pedal’ at any moment is shown in a power display. Instruments also include a driving range indicator and a display showing the battery’s charge state. Also new in the Beetle is an instrument that shows the driver the intensity of battery regeneration. Regeneration refers to the recovery of braking energy: as soon as the driver’s foot leaves the accelerator pedal and/or brakes, kinetic energy is converted into electricity which is stored in the battery. This increases the driving range of the E-Bugster.[wzslider height=”400″ lightbox=”true”]Visions become versions
Bugster? That sounds familiar. Of course: Ragster! That was in January 2005. Also in Detroit. Where Volkswagen presented a New Beetle as a speedster with a swept-back ragtop (folding roof) – the Ragster. A design vision for the Beetle of tomorrow. Wider, lower, sportier. In 2005, the slogan for the concept’s feasibility was expressed as: “Everything is conceivable!”. In 2012, it had advanced to: “Everything is feasible!” Because the idea of the Ragster – wider, lower, sportier – became a reality (with the exception of the ragtop) in October 2011 in the current production Beetle. So, what does the name E-Bugster actually signify? That is easy to explain: a combination of the supplemental identifier ‘E’ for electric models, the American nickname for the Beetle, ‘Bug’ and the vehicle type ‘speedster’ that describes an open-top two-seater.

Proportions of a sports car
The E-Bugster is a Beetle that could hardly be made to look more dynamic. Actually, it is a sports car. It has a height of less than 1,400 mm, which is about 90 mm less than that of the hard top Beetle. And the production model already looks really powerful with its sharply sculpted proportions. The E-Bugster’s width (1,838 mm) grew by 30 mm, while its length (4,278 mm) is identical to that of the production car. The E-Bugster displays very unique dynamic styling from every viewing angle. Design details of production version were supplemented by new styling elements. In its stance on the road, the concept car looks as though it were cast as a single piece. This is due to a very simple fact: in developing the production model introduced in October 2011, the Beetle design team had already considered all potential derivatives for future models on its radar screen of possibilities. And that is in part how a speedster with an E-motor evolved, the E-Bugster.

Bugster front and rear
In front, it is the swept-back and wide windscreen that catches the eye; its glass extends laterally to a point above the A-pillars. The E-Bugster, which is equipped with LED headlights, is also distinguished by the highly customized bumpers of the production Beetle: designers integrated the daytime running lights to the left and right of the central air intake as bands of LED lights in a C-shape (naturally mirrored on the right side). Ever since the e-up! (concept car) was presented in Europe, this form of daytime running light has been a type of signet among Volkswagen electric vehicle studies. These styling elements also appear in modified form as reflectors in the rear bumper, which was also redesigned. The rear windscreen of the E-Bugster proves that the rear windows of a speedster do not need to restrict visibility like the arrow slits in castle walls: it is extremely wide.

Speedster side profile
A speedster needs swept-back windows and a low roof. The E-Bugster has swept-back windows and a low roof! First, let us survey the car’s side profile. Beneath the typically flared wheel housings there are larger 20-inch versions derived from 18-inch Beetle ‘Twister’ wheels, which are equipped with size 235/35 R 20 tires. Between the wings, there is the ‘V’ on the flank that is typical of the most famous Beetle ever. From the side sill, the viewer’s gaze moves upwards over the large, smooth homogeneous surface of the door and the contour line above the door handle that looks as though it were carved by a knife. Just a few centimetres above this point, the Beetle becomes a speedster: the designers lengthened the chrome strip of the lower window border towards the rear; it now runs (as it did once on the New Beetle Cabriolet) from A-pillar to A-pillar. The hard top of the ‘Bug’ extends in a low arc above this line of chrome. Following the roof radius – in classic speedster style – is the upper border of the side windows. The height between the chrome lower window border and the uppermost roof line is a low 400 mm. And that is how it should be for a speedster!

Progressive interior
The combination of high-tech equipment and dynamic performance is also reflected in the interior. Sport seats and a continuous centre tunnel in body color underscore the sporty character of the E-Bugster. The use of aluminium as the material for the door handles and belt guides, and the lightweight construction styling of the steering wheel also produce a direct connection between the exterior and interior. Starting the E-Bugster is a unique experience: the Start button not only activates the drive system; it also puts a light show into motion: first, the interior is immersed in a white light, then a blue light. It begins with a light pulse in the instrument cluster; from there the light emanates as a thin line of light, just one millimetre wide, coursing into the door window sills and around the air nozzles – a kind of visual awakening of the E-Bugster.

Look for reviews and live photos with ElectricCarsReport’s Detroit Auto Show coverage and become our fan on Facebook.