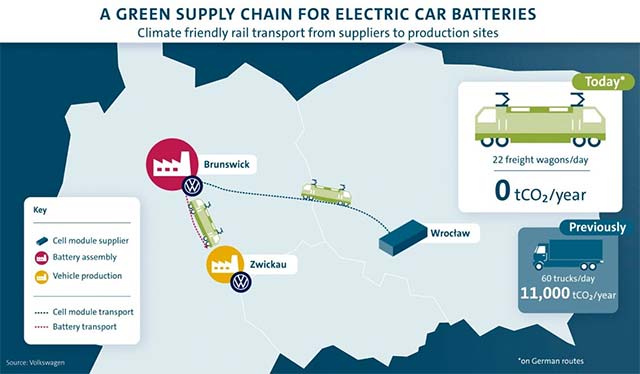 The Volkswagen Group is making battery shipment for its ID.3 and ID.4 electric vehicles even more environmentally compatible and efficient. At the Zwickau plant, the final link in a green logistics chain extending from Poland via Brunswick to the plant in Saxony was commissioned.

This is a fully automated system for unloading batteries from incoming trains. The system will reduce carbon dioxide emissions by some 11,000 tonnes per year, corresponding to the CO2 emissions of a medium-sized village with about 1,000 inhabitants.

“With this green and efficient logistics chain, we are making a key contribution to reducing emissions within the Group and to the delivery of the Volkswagen ID.3 and ID.4 with a neutral carbon balance,” says Thomas Zernechel, Head of Volkswagen Group Logistics.

To deliver the batteries to Zwickau in as environmentally compatible a way as possible, the cell modules are collected from the supplier’s plant in Wroclaw, Poland by rail with DB Cargo and first shipped to the Brunswick plant of Volkswagen Group Components.

For rail transport in Germany, 100 percent eco-power is used. At Brunswick, the cells are unloaded fully automatically and assembled to produce battery systems. These are then loaded onto trains fully automatically and shipped to Zwickau by rail. Here too, electric power from renewable sources is used. For the last mile between the loading and unloading station at Harvesse and the factory at Brunswick, the shipment containers are loaded onto electric trucks as the rail system at Brunswick does not yet extend up to the assembly point.

For shipment, Volkswagen Group logistics experts have developed special containers which can be used both for the cell modules and for fully assembled systems. They are designed to make maximum use of the weights and volumes allowed by the rail cars used. Currently, five trains per week travel between Brunswick and Zwickau – and the number of trips is to be increased in the future.

The unloading and loading systems at Zwickau and Brunswick are regarded as the most advanced units of their type in the industry. The high degree of automation of the systems is an essential prerequisite for efficient battery assembly at the German plants. The key components of the systems at Brunswick and Zwickau are the loading cars, which have an empty weight of about 25 tonnes. They travel on dedicated tracks beside the trains and lift the special containers with battery modules or battery systems into or out of the rail cars automatically. The loading or unloading of the train only takes about five hours.