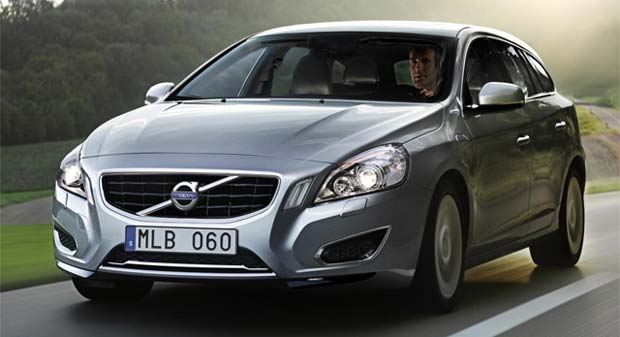 Volvo expects that about 30 percent of total volume will go to Sweden and the other Nordic countries. Germany, Switzerland, Belgium, France, the Netherlands and the UK will have a share of between 5 and 15 percent each.

The production version of the Volvo V60 Plug-in Hybrid will be launched in just one color – Electric Silver. The V60 Plug-in Hybrid is also distinguished by aero-designed 17-inch wheels, integrated exhaust tailpipes and a number of bodywork features in glossy black, such as the grille and the aerodynamic front spoiler. The chromed “Plug-in Hybrid” emblem is found both on the lower part of the tailgate and in a smaller version on the front wings.

The V60 Plug-in Hybrid can be driven on diesel power alone, as a diesel-electric hybrid, or as an electric-only car – technology that no other manufacturer can currently offer. The driver chooses the preferred driving mode via three buttons on the instrument panel: Pure, Hybrid and Power.

Hybrid is the default mode whenever the car is started. The diesel engine and electric motor interact to provide the optimal balance between driving pleasure and low environmental impact. Emissions of CO2 (EU Combined) are 49 g/km, corresponding to diesel fuel consumption of 1.9 l/100 km (123.8 mpg US or 149 mpg Imperial). The car’s total range is up to 1200 km (750 miles). The driver has the possibility to key in the planned route’s distance (short, medium or long) in the car setup menu. The control system calculates the balance between diesel and electric power to obtain the lowest possible CO2 emissions for the given distance.

Save battery power for later
The V60 Plug-in Hybrid offers the driver the option to save battery capacity in order to have enough charge for driving on clean electricity later, for instance in an urban low emission zone.

The aim is that the Save For Later mode should secure enough battery capacity for approximately 20 kilometers drive on pure electricity.

The two-step braking system is another intelligent feature in the Volvo V60 Plug-in Hybrid. When the driver pushes the brake pedal, the system initially brakes the car by controlling the rear axle motor. This braking energy is used to regenerate the car’s battery pack.

The mechanical brakes are only activated when the situation requires more braking power than the rear axle can handle.

Recharging at home
The Volvo V60 Plug-in Hybrid is recharged via a regular power socket (230V/6A, 10A or 16A) at home or in a parking lot. The charging time depends on the level of the current. A full 10A charge takes 4.5 hours. The time is shortened to 3,5 hours with 16A, while a charge in a 6A socket takes 7.5 hours.

To get a comfortable start of the journey, the car driver has the possibility to preheat or cool the passenger compartment during the recharging process. This also means that more battery capacity can be used for powering the car.

The pre-conditioning also includes the possibility to cool the batteries. The battery pack has an ideal working temperature of 20-30°C. This means that the pre-cooling is highly important for maximizing the charging capacity and thereby the driving range on each charge. The timing is programmed via the car’s setup menu or remotely via a smart phone application.

The V60 Plug-in Hybrid has two heating possibilities. When running on electricity a PTC (Positive Temperature Coefficient) air heater is used. The car also has a Fuel Operated Diesel heater.

Smart mobile applications
On the outside the car has several additional features that emphasise its CO2-lean profile, such as lightweight wheels with exceptionally low air drag and tyres designed for low rolling resistance.

The instrument panel in the Volvo V60 Plug-in Hybrid has been modified to give the driver a full range of important information about diesel and electricity consumption, battery charge level, remaining range and so on.

It will also be possible to communicate with the car via a mobile application. This gives the owner access to a number of smart features, such as climate conditioning, both pre cooling and pre heating, a reminder to plug in the charging cable if this hasn’t been done at a certain and pre-set time for charging.[wzslider height=”400″ lightbox=”true”]