Ford Focus Electric to Get 100 MPGe

Ford Motor Co. announced Wednesday that its upcoming 2012 Ford Focus Electric will be the first five-passenger electric vehicle to get 100 MPGe (miles per gallon equivalent).

The 2012 Focus Electric will be the first all-electric vehicle to feature faster charging technology, allowing it to fully recharge in three to four hours – half the time of Nissan Leaf. This technology can help double the car’s range during a busy day of driving and recharging multiple times.

A limited number of Focus Electrics will first be available in California and the New York/New Jersey areas. Availability of the Focus Electric will expand in 2012 to the remaining 15 launch markets as production ramps up.

All Focus gasoline and electric variants to be sold in North America will be built at Ford’s Michigan Assembly Plant in Wayne, Mich., with production powered in part by one of the largest solar energy generator systems in the state. 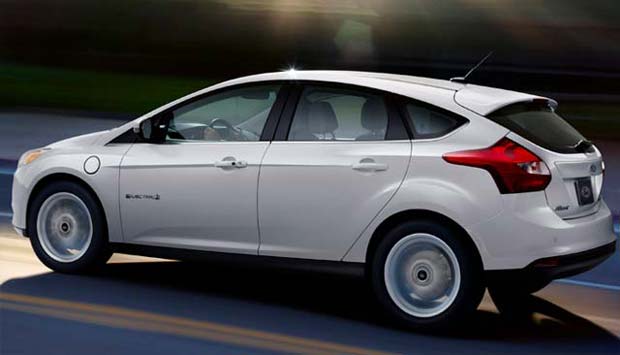 A battery of quality
Focus Electric will be powered by an advanced lithium-ion (li-ion) battery system with an advanced active liquid cooling and heating system to precondition and regulate the temperature in its larger, more complex battery system.

The active liquid system heats or chills a coolant before pumping it through the battery cooling system. This loop regulates temperature throughout the system against external conditions. On hot days, chilled liquid absorbs heat from the batteries, dispersing it through a radiator before pumping it through the chiller again. On cold days, heated liquid warms the batteries, gradually bringing the system’s temperature to a level that allows it to efficiently accept charge energy and provide enough discharge power for expected vehicle performance.

The durability and longevity of batteries – which Ford has been developing and testing since the 1980s – is essential as the company expands its electrification plan. To date, among the nearly 43 million battery cells Ford has tested or seen put to work in customer vehicles, only five issues have been documented. 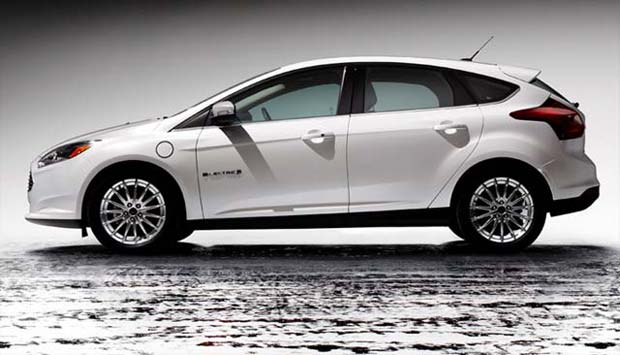 The fuel efficiency of Focus Electric sets it apart from other vehicles. For example, the cost to travel 80 miles is $2.10 – based on the amount of energy it takes (measured in kilowatt-hours) and the national average cost of a kilowatt-hour. Driving 80 miles in a competitive gasoline-powered vehicle that gets 30 mpg would cost $8.80, based on a per gallon cost of $3.30.

A unique “set it and forget it” value charging feature, powered by Microsoft, is designed to help owners in the U.S. charge their cars when the utility rates are lower. The tool aims to help customers avoid unnecessary expense by providing an optimized charging solution. In the future, these smart charging habits can help utility companies understand and better manage the demands placed upon the electric grid because of electrified vehicles. 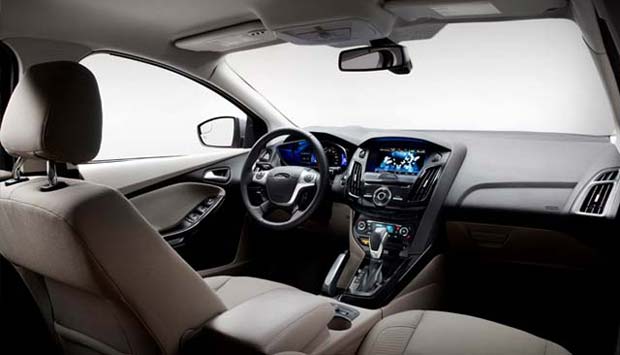 Focus Electric is the first all-electric vehicle to offer faster charging technology, allowing a full recharge in three to four hours with the 240-volt charge station – half the time of the Nissan Leaf.

Ford and SunPower Corp. have teamed up to offer customers a rooftop solar system that can provide enough clean, renewable energy to offset the electricity used to charge the car.

The car’s charge port – conveniently located on the left front fender – activates a light ring that illuminates the port twice when plugged in. The light ring then illuminates in quadrants as the car charges. Each quadrant represents 25 percent of the maximum battery charge.

Technology for more efficient driving, better MPGe
Focus Electric’s SYNC with MyFord Touch driver connect technology was specifically developed for electric vehicle owners and displays key information such as battery state of charge. The system’s MyView feature allows drivers to access even more vehicle data including the electrical demands of such accessories as air conditioning, which can impact driving range.

Drivers also can input destinations, including their next charge point, into the car’s MyFord Touch map-based navigation system, and the car will coach drivers on how to achieve the desired range – or advise if travel plans need to be adjusted. The on-board navigation system provides an EcoRoute option based on characteristics of efficient electric vehicle driving.

The Focus Electric’s next-generation SmartGauge with EcoGuide fuel economy coaching system features a cluster display that uses blue butterflies to represent the surplus range beyond the driver’s charge point destination. The more butterflies there are, the more surplus you have to get to your final destination.

At the end of each trip, a display screen provides distance driven, miles gained through regenerative braking, energy consumed and a comparative gasoline savings achieved by driving electric.

Remote control
Off-board, Focus Electric owners will be able to maintain constant contact with the car anywhere they have a mobile phone signal using the Ford-developed MyFord Mobile app. MyFord Mobile enables access via a smartphone or Web-based interface to:

– Monitor the car’s state of charge and current range

– Get alerts when it requires charging or has finished charging

– Locate charge stations and plan routes to find them

The feature also allows the owner to program the car to use electricity from the grid to heat or cool the cabin while plugged in – called preconditioning. For example, during hot summer months, owners can preprogram the car the evening before to be fully charged – and fully cooled to a particular temperature – by a certain time the following morning.

Engaging to drive, too
Not only is Focus Electric designed to provide outstanding energy efficiency and reliable operation, it also delivers real driving enjoyment. The all-electric powertrain and single-speed transmission provide immediate responsiveness and smooth acceleration when the driver pushes down the accelerator; it’s expected to achieve a top speed of 84 mph (136 kph).

Much of the Focus Electric’s steering, handling and braking feel is shared with the agile, sporty, fuel-powered five-door hatchback Focus model upon which it’s based. At the same time, the vehicle’s absence of gasoline or diesel engine and its outstanding aerodynamics lead to a remarkably quiet, comfortable in-car experience.