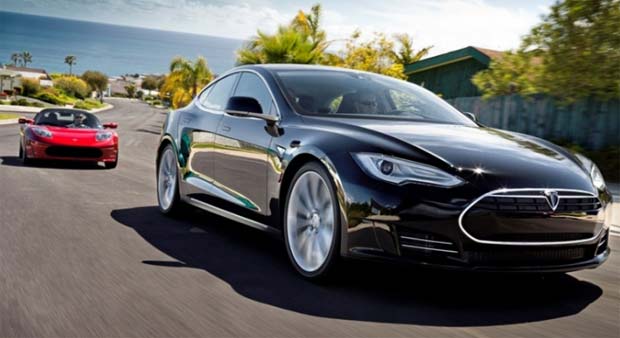 Tesla Motors has announced that their much awaited Tesla Model S electric sedan will start at $49,900 after the tax credit for the base model which will have a driving range of 160 miles.

The Tesla Model S prices are based on the battery pack size, the number of options, and there is a Performance version of the Model S with higher speed and a commensurately higher price.

All models include a 17 inch touch screen infotainment display on the dash and 19-inch wheels, while 19-inch aerodynamic wheels that boost range by another 20 miles are optional and come in at $1,500. All vehicle, media, communication, and cabin controls are displayed on this screen.

The Tesla Model S comes with a single 10 kilowatt charger that delivers up to 31 miles per hour of charging.  For an additional $1500 your Model S can have two chargers, for a total of 20 kilowatts of charging speed, or up to 62 miles per hour of charging, but of course this would require a 240 volt 85 amp circuit. Tesla has also developed the Supercharger for the 85 and 60 kilowatt models, which will be available in a network of Supercharger stations operated by Tesla, and will provide up to 160 miles per 30 minutes of charging, which means fully replenishing the 85 kilowatt-hour battery pack in about an hour.

All Tesla Model S models have an 8 year warranty on the battery pack.

The Tesla Model S electric sedan will be made at a factory in Fremont, California.