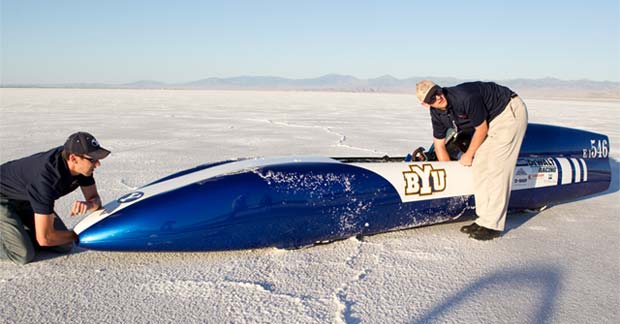 An electric car designed and built by BYU engineering students set a world land speed record for its weight class, averaging 155.8 mph over its two required qualifying runs, one of which was clocked at 175 mph.

The milestone marks the end of a seven-year quest of more than 130 students, led by Perry Carter, who just retired as an associate professor.

In land speed racing jargon, the car is called a streamliner, meaning it has a long, slender shape and enclosed wheels to reduce air resistance. Students custom-built the lightweight carbon fiber body after modeling it on a wind tunnel program on a computer.

The aerodynamic shape, along with its lightweight carbon fiber body and 880 lithium ion batteries, helped the car reach its high speeds.

The streamliner, named “Electric Blue,” competes in the “E1” class, which includes cars weighing less than 1,100 pounds. Because electric cars rely on heavy batteries, engineering a speedy vehicle at such a light weight is very difficult. That’s why there were no prior certified speed runs for this class, although unofficial standards reached the 130s.

The BYU team completed a qualifying run at 139 mph last year, but failed to complete the required second run when the car rolled, damaging the car’s body but not the driver’s.

About half the students who have worked on the streamliner program over the years have been manufacturing engineering technology majors, about 40 percent mechanical engineering majors, and the rest from various other disciplines. Many worked on the car as part of an annual capstone course, but most were unpaid volunteers. The primary sponsor of the project is Ira A. Fulton, after whom BYU’s College of Engineering and Technology is named.

Kelly Hales is a BYU electrical engineering major who came to BYU to prepare for a career working on electric cars. He joined the streamliner team and took over as student captain of the project when Baxter completed his BYU MBA in April and left to work for a space exploration company. Baxter is one of many alumni who have gone on to success in their careers – several working on electric cars or competitive car racing – after helping develop the streamliner.

“This is a wonderful closure to 31 years of teaching at BYU and many projects,” Carter said after the record was certified. “But this is the one that takes the cake. I’m done.”