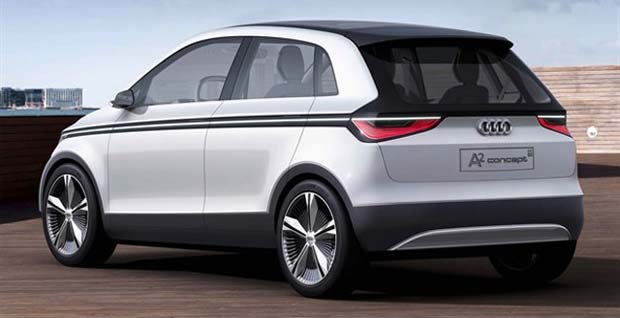 Audi has released first photos and more details of the electric A2 concept, ahead of car’s public debut at the 2011 Frankfurt Motor Show next week.

The electric A2 clean appearance concentrates on the essentials; all details are subtle but shaped for visual impact. The dark glass roof of the white-painted show car switches to transparency at the touch of a button.

The Audi A2 concept is 3.80 meters long, 1.69 meters wide and 1.49 meters high, yet it manages to make a powerful impression on the street. The A2 concept is 15cm shorter than an A1. It’s a fraction narrower, too, but 7cm taller.

At 1150kg the A2 weighs roughly the same as an A1 1.4 TFSI. The A2’s comparatively low weight – for an electric car – has been achieved through a number of measures. Chief among them is a body constructed largely from aluminum, with addition carbonfibre-reinforced polymer (CFRP) elements.

An 85kW (115hp) electric motor drives the front wheels through a single-speed transmission, with a maximum of 199 pound-feet of torque and an estimated range of around 125 miles (200km) thanks to its lithium-ion battery pack that is mounted in the floor. Audi says it can also use a range-extending hybrid powertrain.

The full charging takes 1.5 hours with a 400-volt current and around four hours using a 230 volt household current.